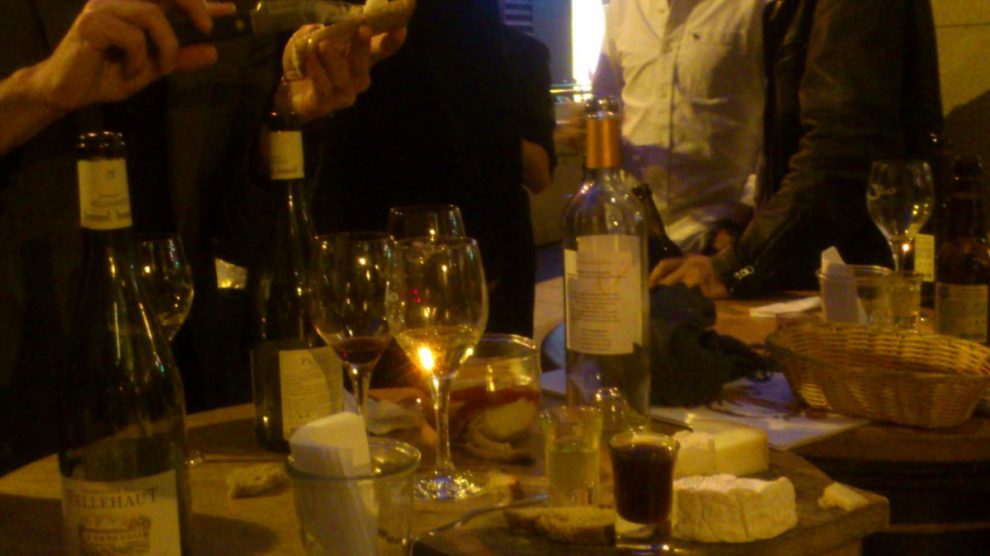 Visitors always seem to have a hard time figuring out what the rules are for drinking and smoking in France. It doesn’t help that the laws have changed several times between 2008 and 2019, and that some Parisians openly flout them. Here’s a primer to steer you in the right direction.

The legal drinking age in France is 18 years for ALL ALCOHOL INCLUDING WINE AND BEER.

Before 2009, it was legal for 16-18 year olds to drink “fermented” beverages such as cider, wine and beer, but the laws have changed, and now it’s 18 for all alcoholic beverages.

“Article 93 of Act No. 2009-87 of 21 July 2009 on hospital reform and on patients, health and territories confirms the prohibition of the sale of alcoholic beverages to all minors (and no longer only to minors under 16 years of age) and adds that the offer of such beverages free of charge to minors is also prohibited in drinking places and all shops or public places.” – translated from the French Ministry of Health article here.

You can buy alcohol in any supermarket, convenience store or wine boutique (but only until 10pm; 8pm in places where consumption is forbidden after 4pm). Some restaurants only have a license to serve alcohol with food.

In the 1990s (when I was a student), the French, even university age students, didn’t engage in the excessive drinking habits of their Anglophone counterparts. That’s why so many student bars in Paris are English, Australian, or American! But that has all changed in recent years and the laws are catching up.

There aren’t generalized “open container” laws, but there are certain areas that restrict public alcohol consumption on the street after 4pm: Champs-Elysées (8the), all around the Eiffel Tower and Champ de Mars (7th) all around Notre-Dame (4th); “sensitive” districts like Stalingrad (19th), Saint-Blaise (20th) and around Gare de Lyon (12th); festive night life districts like the Latin Quartier (5th/6th), Oberkampf (11the), le Marais (4th)… and even after 9pm along the Canal Saint-Martin (10th) and after midnight along both banks of the Seine from Pont Bir-Hakeim to Pont de Tolbiac on the Right Bank and from Pont Mirabeau to Pont d’Iéna, as well as Pont Royal to Pont de Tolbiac on the Left Bank. Of course you’ll see a LOT of people breaking the rules along the Seine, but if your group is rowdy and has an open container, consider yourselves targets for the police.

Drinking and driving is a crime in France. The limit is 0.5 g of alcohol per litre of blood, which is approximately the equivalent of 3 halfpints of beer, 2 glasses of wine or 3 glasses of champagne for an adult male.

For more information, read the July 2019 article: “Are you sure you know the drinking laws in France?”

Parisians smoke. People visiting Paris smoke (especially refugees from California). There’s a lot of smoke. Get used to it, or just resign yourself to seeking out the places that are less smoky (or at least better ventilated). But at least since 2008 they can’t smoke indoors anymore.

The new “Loi Anti-Tabac” (anti-tobacco law), voted into law October 16, took effect in 2008. Hotels are all non-smoking, which the managers like because they won’t have to pay the costs of cleaning the smoke and burn marks, but many are worried about enforcement. You can still smoke right outside the doors of bars and on café sidewalk terraces, so it’s not yet as strict as some places

Persons living in a Member State of the European Union are not restricted in regard to purchasing goods for private use, but the recommended allowances for alcoholic beverages and tobacco are as follows: 3200 cigarettes, 400 cigarillos, 200 cigars, 3 kg of smoking tobacco, 110 litres of beer, 10 litres of spirits, 90 litres of wine, 20 litres of fortified wine i.e. port or sherry. Americans are allowed to bring in one liter of alcohol and 200 cigarettes duty free; after that you’ll have to pay duties.