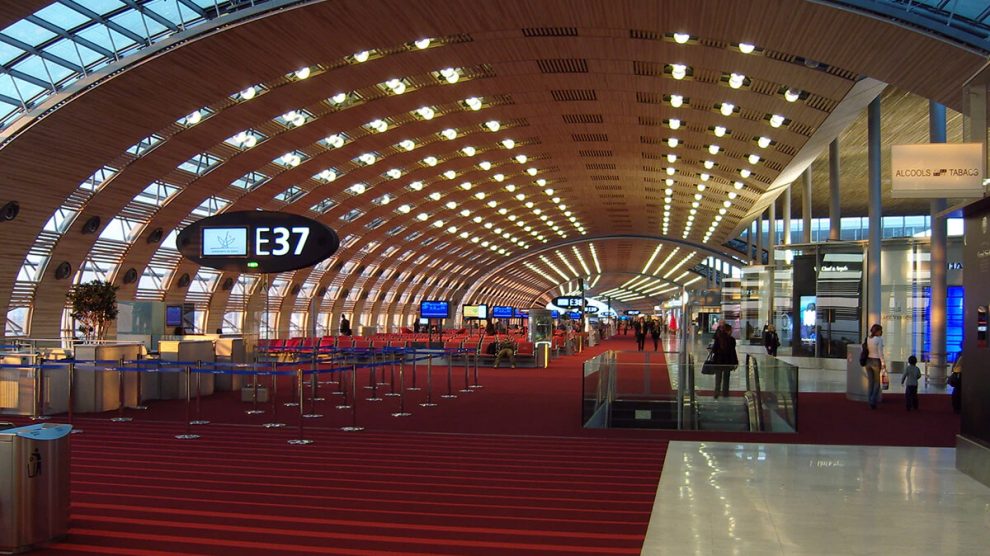 There are two major international airports in the Paris suburbs: Charles-de-Gaulle and Orly. They are jointly known as the Aéroports de Paris and share a bi-lingual website.

Heather’s Quick Advice: The best way to get to and from either airport in terms of cost, safety, and convenience is to take one of the airport busses listed below into central Paris (then taxi to your hotel), or reserve an airport shuttle to take you directly to your hotel for a flat fee.

This is the main airport for flights to and from North America. It’s sometimes referred to as “Roissy”, after the town. It’s about 40 minutes (26km/16 miles) northeast of Paris (without traffic). It has three terminals (formerly linked by the slowest shuttle bus in the world, now liked by the free, super-fast CDGVal light rail):

Terminal 1 was born the same year as moi, 1974. It’s circular, and with the funky tiling resembles a public restroom. It was completely renovated in 2009, so it’s not as miserable as it used to be, but don’t expect to find many shops or dining options. The best thing about this terminal is that it’s small enough that you won’t have to walk far to get to your gate.

Terminal 2 is the pretty one, all modern and sexy like airports should be. By far the best shopping is here. There are 6 sections in Terminal 2, A through F. Be sure you know from which one you’re departing — they’re not that close together! If you are in the wrong one, there are free navette busses that circle between them.

Terminal 3 used to be called T-9 just to confuse everyone. It looks like a military hangar. There’s one café and a news stand. It’s mostly used for inter-Euoprean flights and charters. FYI: You used to have to walk outside (up a slight hill and through a long tunnel) to get to or from the RER station, but now you can hop on the CDGVal free rail link.

Getting to and from CDG

The RoissyBus (operated by the RATP/Paris Transit Authority) has daily service from 6am-12:30am between Roissy-Charles de Gaulle (all terminals) and the Opéra Garnier (corner of Rue Scribe and Rue Auber) with departures every 15-20 minutes, travel time 45-60 minutes. One-way tickets are €12.50 (Zone 5 transportation passes accepted), which can be purchased on the bus, at the airport, or in Métro stations in Paris.

The Bus Direct (formerly called the Air France Bus) is more expensive (€18 one-way, €22 direct to Orly Airport) but has more drop-off/pickup points in Paris . There’s regular service every 15 minutes from Roissy-CDG from 5:45am-11pm to Porte Maillot, the Arc de Triomphe, Eiffel Tower, Gare de Lyon and Montparnasse. Travel time is approximately 50 minutes. (Note: I found this service is more reliable FROM the airport than TO the airport, buyer beware!)

The Noctilien (also run by the RATP) is the night bus service, with line N140 going between Roissy-CDG and Paris Gare de l’Est (southwest corner of Rue du 8 Mai 1945 and Blvd Strasbourg) every hour from 1am-5am (travel time 90minutes). Line N120 and N121 have more stops throughout Paris, with the most busses from Châtelet (southeast corner of Blvd Sebastopol and Rue Rivoli) between 11:30pm-5am, every 30-60 minutes. The airport is zone 5, so you’ll need to stamp four Métro tickets or pay €6.80 directly to the driver. If you need to arrive at the airport at dawn the night bus is the best cheap option.

For budget travelers with a lot of time, two RATP municipal busses run from the center of Paris to the airport for just €6 (or three regular bus/metro tickets): Line 350 from Gare de l’Est station (estimated time 70 minutes) and Line 351 from Place de la Nation (also 70 minutes). They both drop off and pick up outside the Roissypole station (right outside the RER terminal at CDG).

There are several companies offering shuttle service to or from the airport for a flat fee. There’s usually a digressive rate for more than one passenger. They usually only operate from 7am-8pm, and you’ll need to reserve at least three days in advance. If you are sharing the shuttle with other passengers, you may be the first or the last to get picked up/dropped off, so this is not a good idea for anyone in a hurry to get into Paris (although the shuttles know to get you to the airport in time, if not earlier than necessary). The peace of mind factor is the main asset here. A few links:

Cab Service Tel 08 25 56 19 19 (I use this service all of the time on my tours and can personally vouch for their professionalism and timeliness; not the budget option).

It’s usually faster to take the RER (suburban express railway), but be prepared to haul your luggage up and down the stairs and through turnstiles. RER B runs daily from approximately 5am until midnight (until 11pm towards the airport), and costs €11.40 for a one-way ticket. Stops in Paris include Gare du Nord, Châtelet-Les Halles, St-Michel, Luxembourg and Denfert-Rochereau. Travel time is 25-45 minutes depending on what station you get on and whether it’s an express or local train. My experience is that it’s not very safe to take the RER B after dark or if you’re traveling alone to Paris for the first time.

Travel time between Roissy-CDG and Orly airport on RER B is 60-minutes, and costs €17.90.

Taxis used to be a total nightmare, with unpredictable fees and drivers who only accept cash. But lots has changed (thanks to Uber entering the game), so now all airport taxis are a FLAT FEE of just €53 for the Right Bank of Paris and €58 for the Left Bank. Disneyland and Versailles are €70-€90. Credit cards are accepted, and it’s a good idea to get a receipt. Just follow signs to the nearest official taxi stand for your terminal.

Note: Don’t EVER accept a taxi ride from anyone who approaches you saying they’re a taxi (legal taxis are lined up outside the terminal, with the lit-up “taxi” sign on their roof, and they never get out of their cars to come look for passengers).

This airport is slightly smaller than CDG, but is closer to Paris, about 20 minutes (9 miles) southeast of the city (without traffic). Whenever you have the option, try to fly into Orly instead of CDG. There used to be two terminals, Orly Sud and Orly Ouest, but in 2019 they connected them into one giant terminal with four main zones, 1-2-3-4:

Orly 1 and 2 (formerly Orly Ouest) are now connected to Orly 4 (formerly Orly Sud) by the new Orly 3. They’ve gone through a complete remodel as well, with new shopping and dining options. The arrivals and departures are in each zone, so you need to check your ticket to see whether your flight is in Orly 1, Orly 2, Orly 3, or Orly 4. Then just follow the signs!

Getting to and from Orly

The OrlyBus (run by RATP) has daily service from 5:35am-11:30pm between Paris-Orly and Denfert-Rochereau (outside the RER/Métro station) with departures every 15-20 minutes. One-way tickets are €8.70 (Zone 4 transportation passes accepted), which can be purchased on the bus, at the airport, or in Métro stations in Paris. Travel time is about 30-minutes.

FYI: If your Paris accommodation is in the 13th or 14th arrondissements, ask the driver about the additional drop-off and pick-up points in these districts (or pick up the OrlyBus brochure at the RATP ticket desk at the airport).

The Bus Direct has regular service from Paris-Orly to Gare de Montparnasse, Le Motte Piquet, Eiffel Tower, Trocadéro and Arc de Triomphe every 15 minutes from 5am-11:40pm, tickets €12, or direct to Roissy-CDG Airort for €21. Travel time about 40 minutes.(Note: I found this service is more reliable FROM the airport than TO the airport, buyer beware!)

For budget travelers with a lot of time the RATP bus 183 runs from the Porte de Choisy (line 7 metro or Tram 3) to Orly 4 for just €2 (or one regular bus/metro ticket), estimated travel time about 30 minutes.

The OrlyVal has the most reliable and regular service to Orly Airport, combining the RER B and OrlyVal (€12.10) monorail trip to both terminals with one ticket. It runs daily every 4-7 minutes from 6am-11pm between Antony-Orly and Paris (including Gare du Nord, Châtelet-Les Halles, St-Michel, Luxembourg and Denfert-Rochereau). Approximate time between Châtelet-Les Halles and Orly is 35-minutes. Zone-4 transport passes are accepted.

The RER C also has service to Orly airport, combining RER C with a free “Go C Paris” shuttle. It runs daily every 15 minutes from about 5am-11pm (depending on which direction you’re heading), between Pont de Rungis-Aéroport d’Orly and Paris (stations include Gare d’Austerlitz, St-Michel, Invalides, Javel and Port Maillot). Travel time is about 40 minutes between Invalides and Orly, one-way tickets cost €6.35. Zone-4 transport passes are accepted.

When taking RER, be prepared to haul your luggage up and down the stairs and through turnstiles.

Travel time between Roissy-CDG and Orly airport on RER B is 60-minutes, and costs €17.20.

Relatively new (2017), and by far the cheapest way to get to the airport, you can now take Tramway T7 directly to Orly Airport from Paris via the metro station Villejuif-Louis Aragon (line 7). Just use the same T+ metro tickets (€1.90 as of March 2019) that you use in Paris. Service runs daily 5:45am-12:30am, and takes about 35 minutes once you’re on the tram (so be sure to count the time to get to Villejuif-Louis Aragon station, usually 20 minutes from Châtelet, central Paris).

By Shuttle or Taxi

Same info as for Charles de Gaulle Airport, above, except the flat rate for taxis is €37 to or from the Right Bank, and €32 to or from the Left Bank.

This is the “Low-Cost Airline Airport” with flights to other European cities by airlines like Ryanair and Wizzair. It’s about 90 minutes north of Paris, with its own shuttle connections from Porte Maillot (Metro/RER line 1).