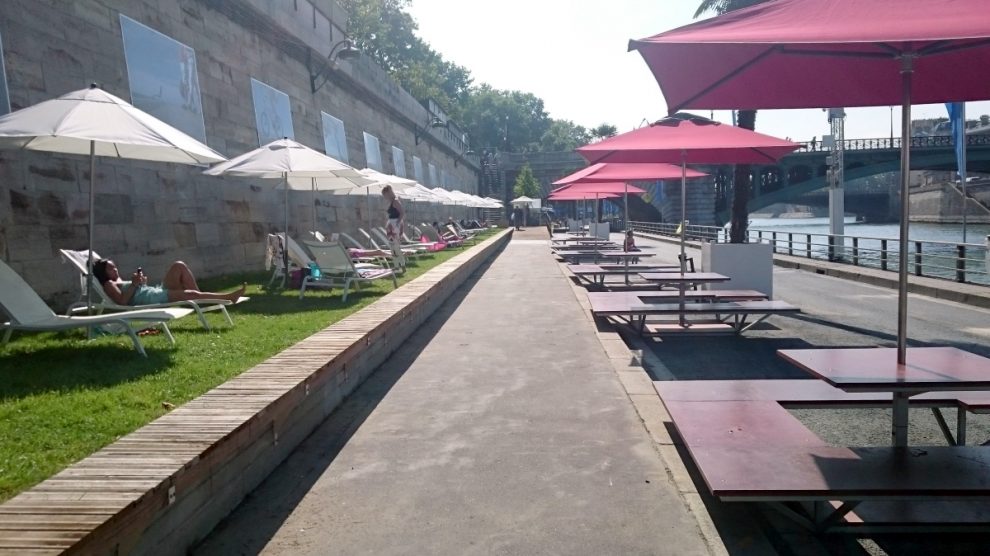 August is a famously sleepy month in Paris, the time when the juilletistes (those French who take their summer holidays in July) switch places with the aoûtiens (pronounced “ah-oo-sien”, who prefer their vacation in August). Small shops may close for the month, and bakeries go on rotation. Even some cultural institutions go into standby mode. For those stranded in the city, there’s always “Paris Plage,” that bizarrely agreeable transformation of the banks of the Seine into a stretch of the Côte d’Azur.

Anyone not familiar with it should go. On the right bank, stretching from the Louvre to Bastille, you’ll find more than artificial beach (5000 metric tons of sand) available for lounging and tanning, but also tai chi, games for kids, an open air library, space for playing boules, and more. (A similar installation runs along the Bassin de la Villette, which you can access near the Métro station Stalingrad.) This year Paris Plage runs through September 4th, so there’s still plenty of time to enjoy it.

For all its laziness, August is also a kind of countdown. While the calendar insists that New Year’s Day falls on January 1, the cultural beginning of the year is September. This is known as la rentrée, or “re-entry,” a word that evokes the fiery return of a space capsule aiming for splashdown.

The rentrée has many variations. Preparations for la rentrée scolaire (return to school) become evident late in August as parents show up in stationery shops with long lists of required school supplies. French teachers are famously finicky, specifying how many notebooks of how many pages covered with what kind of lines each student should have—usually one per subject. Add to this the colored pencils, the plastic protectors, the markers, the erasers, and you can see why each year there’s a national debate about the weight of the cartable—the rectangular school bag students carry strapped parachute-style to their back. (Last year the average weight of a sixth-grader’s cartable was twenty-two pounds, or about one third the weight of the kid. French schoolchildren are thus a little like Sisyphus, except that Sisyphus didn’t have to carry his boulder on his back.)

September also brings the rentrée littéraire, the annual release of hundreds of new titles in all genres that begin to flood the bookstores. Newspapers and magazines will soon be abuzz about this year’s newest novel by Amélie Nothomb or Laurent Mauvignier. As Paris is the capital of publishing in France, it’s also the center for author appearances. Visitors interested in catching a glimpse of their favorite living writer should watch for notices in their local bookstore. (For the dead ones, be sure to check out the Père-Lachaise and Montparnasse cemeteries.)

Finally, autumn marks the rentrée culturelle—the new season of cultural events. Theaters, concert halls, dance stages all start to come to life. The offerings of Paris are dizzying, so it’s helpful to narrow one’s focus. One of my own favorites is the Studio Théâtre, a small space run by the Comédie Française for the production of short plays (usually just an hour), which tend to be brilliantly staged. (Go to the CF website and click on the calendar.) Another reliable address is the Théâtre du Chatelet, which will stage Pina Bausch’s Viktor and Georg Büchner’s Faust in September. And if you’re looking for the cutting edge music or dance, it would be hard to do better than the Cent Quatre. This giant cultural center (built in the macabre old premises of the city’s undertakers) offers some of the most astonishing work in the capital.

The rentrée is the turning point, the kick-off. It’s a fresh start. And after the events of 2016 (terrorism, manhunts, floods, demonstrations, strikes—just for openers), who isn’t ready for that? Of course, in some cases it just means the bell for Round Two: some of the unions have promised a rentrée chaude, keeping the heat on the government. Then we’ll just drag ourselves forward until Paris Plage of 2017!

* Learn all about Paris Plage Here *