Home » French Culture » Summertime in Paris: How to Look Like a Native 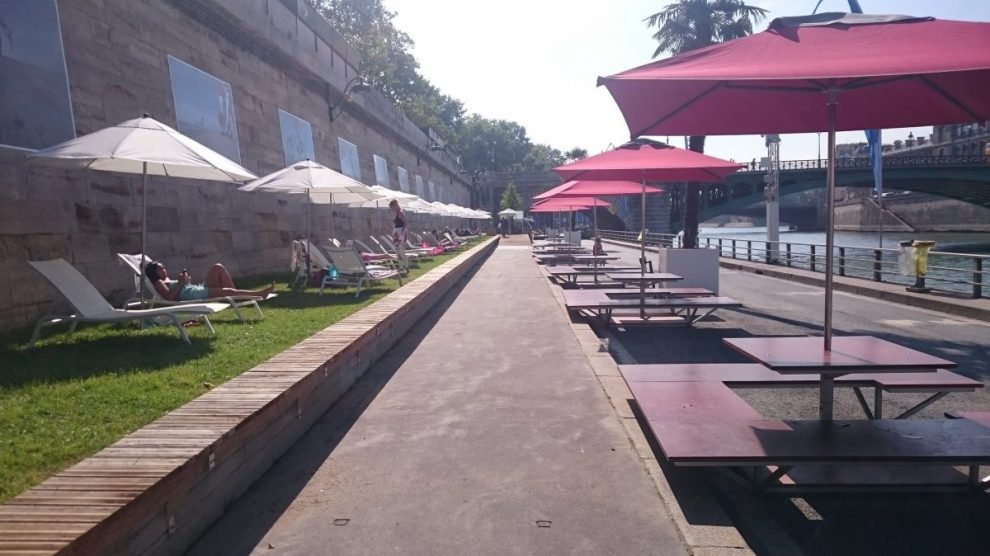 Parisians do not all dress alike, but they certainly have a “look”. You can wear any color you want, as long as it’s black, black, or black. Beige and red seem to work their way into the Parisian wardrobe, as do many shades of gray, but you should leave that to the pro’s. Besides, as a French woman once explained to me, black is slimming, easy to match, good for dressy or casual, and it doesn’t need washing as much (thus, the perfect travel garment). So you’ve got your black shoes (sandals are okay, Tevas and socks are bad; this is Paris, not Hamburg or Minnesota), make sure they’re not too scruffy, and the rest of your outfit can relax a bit. A dress, skirt, pants or jeans are fine. Don’t wear shorts unless they’re of the mini-micro variety sported in gay clubs and on supermodels.

Perhaps now you’re thinking, “All black? In summer? No shorts?” Well, it’s not that hot in Paris, and if it is, you should be in a cool café or in an air conditioned environment, not sweating outside with the uncool people. To top off the look, you must have a pair of dark shades, the gaudier the better (aviators and those huge Italian things are always a good bet). Parisians wear these indoors and out, in sun and in rain. My guess is that they’re good for discreetly eyeing the others around you, or perhaps for hiding those eye-lift stitches for a few days. In any case you can get away with just wearing lipstick if your eyes are well hidden. If you’re a daring type of traveller, let your hair grow out a bit before your vacation, and indulge yourself in a Parisian haircut. You’ll never look more Parisian than when you emerge from the styling gods at the French salons. Hell, why not get a manicure or facial while you’re at it. This is how Parisians live, Baby!

Walk the Walk, Talk the Talk

Okay, now that you’ve got your disguise, don’t blow it as soon as you step out the hotel door. Accessories like cameras, fanny packs, LL Bean Backpacks and the Big Map of Paris need to be discreetly tucked away. Think streamlined, buy a cheap over-the-shoulder backpacks or a sleek tote bag. Holding your possessions close to the body in this way will make you fit in with all of the Parisians who do this to deter pickpockets and run-by thieves (happens in broad daylight, folks). When talking to others in your group (hopefully a small group-nothing looks worse than a dozen tourists coming at you down a narrow sidewalk), keep your voice low enough so that only the person you are talking to can hear you. Americans are an easy bunch to spot because we tend to talk to each other from across rooms, restaurants, or the metro. It makes you look stupid, and it makes you a target, so keep it down (you’ll be much more mysterious, too, if no one can hear you). The low Parisian voice may be a product of personal space shortages. You’ll notice right away that people sit, stand, and eat closer together here. It can be a bit annoying when you’re in line or in a restaurant, but this is a small city with a lot of people. Walking and sitting like a Parisian will be easier if you imaging the tiny Parisian fitting into a tiny space. Don’t swing your arms too much when you walk, and don’t spread yourself out on benches or chairs. If this is confusing, simply spend an afternoon doing what the locals do best-watch everyone else.

Most newcomers to Paris will immediately notice that all seats on a café terrace face the sidewalk, and people sit side-by-side, not facing each other, so that both can participate in that French sport of people watching. Many of these watchers will be wearing their sunglasses, so you should be too. The entrance is very important, after that you can relax anonymously if you’re quiet enough. Almost all café terraces are seat-yourself. Try doing this without too much moving around of chairs, and don’t hesitate to grab a table even if it hasn’t been cleared yet. Whatever you do, don’t blow your cover by asking if you can sit where you want. Think Parisian, think snobby. Secondly, and this is important even if you’re not trying to fit in, do NOT buy a drink at the bar or counter and then try to sit outside with it. I can only think of one place in Paris where you won’t have an angry waiter after you for this. The reason is that there is usually three prices for any drink in a café: bar (standing) price, table price, and terrace price being the most expensive. You may not like paying $5 for a tiny espresso, but remember, you’re paying for real estate for a few hours. Yes, I said hours. You can’t really get to know Paris without spending a good afternoon in your spot. I’ve never been asked to leave, not even at Deux Magots, where I usually catch up on letter writing over a hot chocolate. Having reading material is handy for beginners who don’t want to look like they’re staring. When the waiter comes, and it may be awhile, just reax, don’t ask for the menu, that’s boring and will target you right away as a fraud. Just say, “un café, s’il vous plait,” or “un Evian” if you can’t bear coffee. “Une biere” in the summer is nicer and less expensive than a Coke, so that is always a nice option, and you’ll get the regular lager, probably Amstel or Leffe or Kronenburg. Pay when the waiter puts the receipt down, but he may take ages to come back with change. Patience. Think Paris…

Navigation for Newcomers and Near-Natives