Home » French Culture » Can You Wear Shorts in Paris? 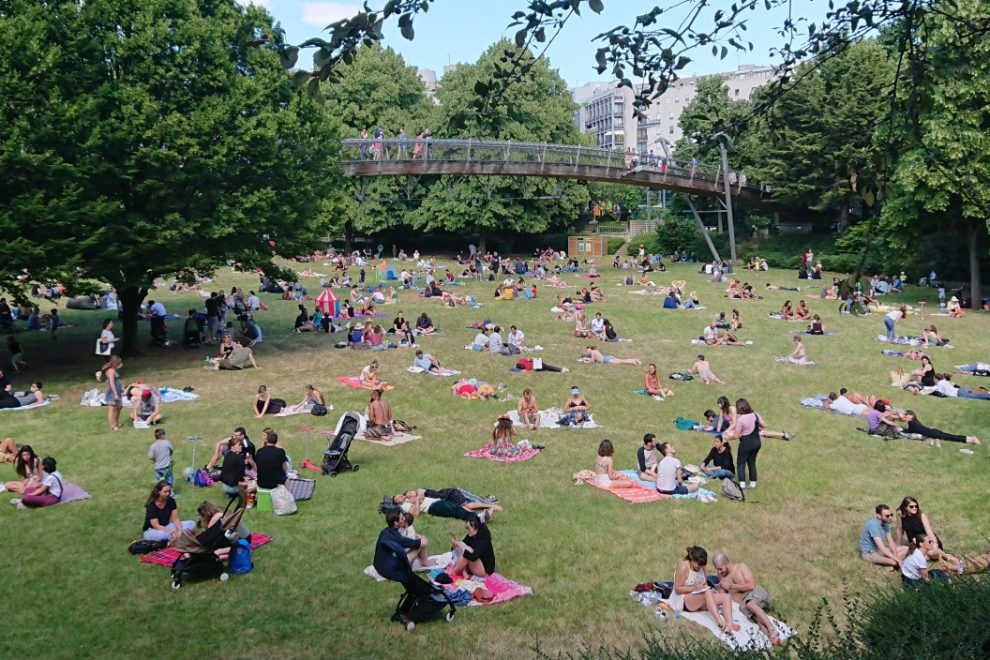 I get asked this question a lot. Especially since summers have been getting hotter and hotter each year in Paris (temperatures between 85°F-102°F are no longer rare). I always answer the same way: yes, of course you can! But then I have to go into the more extended version of that answer, because it’s not a simple question.

Because the reality isn’t as black and white as many people would like to believe. In Paris, what you wear isn’t as important as how you wear it, and, in many cases, who is wearing it. When my fabulously stylish friends (male or female) wear shorts, they look fabulous and stylish (if you think that could be you, read a Parisian fashion expert’s advice on how to wear shorts in Paris). But some people just won’t ever look “stylish”, no matter what they wear. When my dad wears shorts, he looks like an American tourist. (Sorry Dad!)

The truth is, no matter what he wears everyone will immediately know my dad is an American tourist. It’s not just the shorts (although they are usually a first indication), it’s the whole “look”, including your weight, height, hair color, the things you’re carrying, the way you carry yourself, the language you’re speaking (and how loud you speak it) that gives you away as a tourist. Even if you think you’re blending in, most Parisians can spot a tourist if they look closely enough. So don’t wear uncomfortable clothing just to avoid being pegged as a tourist. There are millions of you here; it’s not by default a bad thing to be a tourist.

“But isn’t it disrespectful to dress badly instead of trying to blend in with the locals?”

When You Should Avoid Shorts

If you are dining in a nice place, particularly for dinner, it’s always more respectful to make an effort to dress nicely (minimum “dress casual” meaning no shorts, t-shirts or shabby outfits). If you are the guest of a Parisian (in their home or invited out to dinner or an event) by all means dress appropriately (and assume shorts are not appropriate unless you’re all under 30, attending a BBQ in the countryside, or a picnic where you’ll be sitting in the grass). You never want you or your host to be embarrassed, so ask if you’re not sure. If you are going luxury shopping, wear the kinds of things that would be sold in those stores if you don’t want to be ignored or dismissed as a gawker by the sales staff. If you’re wearing a pair of Gucci shorts in a Gucci shop, you’re probably okay (although I doubt people who buy their shorts at Gucci read blog posts titled “Can You Wear Shorts in Paris?”). If you’re trying to get into the hottest Parisian nightclub and you’re not a supermodel with an entourage of supermodel friends, then don’t wear shorts or you’ll be left standing outside the velvet rope all night.

And if you’re a local, wearing shorts to the office in France is pretty much out of the question (unless you’re boss is wearing them or tells you it’s okay), and going anywhere but running/exercising while wearing running shorts will result in raised eyebrows (or, in my case, refusal of service at Harry’s New York Bar after the #BostonStrong memorial run).

When You Can Wear What You Want

Even if you’re not a style icon or fashion model, there are many occasions when it’s still okay to wear shorts. If you’re just doing touristy things (museums, monuments, walking tours, souvenir shopping), eating in casual cafés and brasseries (especially for lunch), and only interacting with people in the tourist service industry, then wear what makes you comfortable, including shorts. Locals avoid touristy places, or assume everyone there will be dressed badly anyway, so one more tourist in a pair of shorts isn’t going to shock anyone.

If you ask a Parisian if they find it offensive, they might say yes, but just because the idea bothers them doesn’t mean they’re going to actively go out of their way to make some random tourist feel bad. They’re much too busy caring about their own lives to really care about what you’re doing. So in theory they don’t like it, but in practice they’re not paying attention to the tourists anyway (and remember: they always can tell you’re a tourist).

When No One Cares

Once the temperatures hit 90°F in Paris (or over 30°C), everyone is too hot to care what anyone else is wearing. With global warming, it’s inevitable Parisians in shorts are going to be more common (especially if it’s the only alternative to air-conditioning; hard to tell which the French hate more). As you might notice in these photos, many of the Parisians in shorts are men, simply because women have the option to wear shirts or dresses to keep cool.

All Parisian Neighborhood are Not Equally Stylish

One thing that’s important to note is that Paris isn’t some sort of homogeneous fashion zone. There are areas of Paris where people generally dress up more, particularly in fashionable shopping districts like St-Germain-des-Prés and around the Place Vendôme and the Rue du Faubourg St-Honoré. But head into the outer and eastern Parisian arrondissements and you’ll see more shorts, tee-shirts and sneakers than wrap dresses, stilettos and dinner jackets. No one really sticks out wearing shorts in Belleville, Canal St-Martin, or the Butte aux Cailles.

One Last Thought on the “Ugly American” Stereotype

Sometimes I find other Americans (often the expats living here) are much more openly judgmental — how rude! — to their fellow Americans than the Parisians. I helped out on the Paris episode of the ABC Primetime series “What Would You Do?” hosted by John Quinones, called  “The Ugly Americans”. We couldn’t show it (because she refused to sign the waiver), but the only person that actually screamed rudely at the actors to “go home!” was another American woman at the next table (the producer paid for her meal).

Maybe it’s because while Parisians can just shrug off our behavior as “just another American tourist”, we Americans take it personally. As if Parisians will think less of all of us because of how our compatriots are dressed. I’ve never met a French person who didn’t like me simply because I was American. Generalizations are just that, and apply both ways. Most Parisians are intelligent enough to know that no one can represent an entire country…just ask what they think of other French tourists who visit Paris!

I think it’s admirable that many Americans take the time and effort to actually question what is respectful to the locals when traveling, and the Parisians appreciate it, too! Because as much as they love giving their opinions on etiquette, most would consider it too rude to actually correct someone else in public. And in the end, those of you who are reading this are probably not the ones who actually need to be reading this.