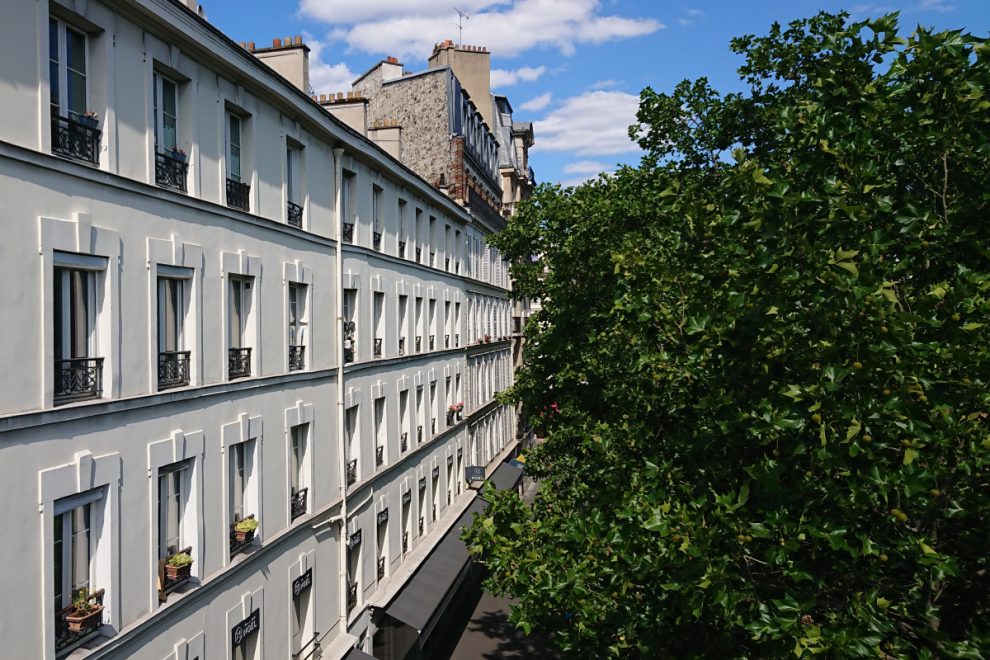 We’re very excited to announce the launch of French Like Me: A Midwesterner in Paris, a travel memoir by Secrets of Paris contributing editor Scott Dominic Carpenter. Whether you’ve been wondering what it would be like to live in France, or recognize your own experiences in these stories, enjoy the excerpt from the book and be sure to join us for the virtual book launch on July 11th!

When Scott Carpenter moves from Minnesota to Paris, little does he suspect the dramas that await: scheming neighbors, police denunciations, surly demonstrators, cooking disasters, medical mishaps―not to mention all those lectures about cheese! It turns out that nothing in the City of Light can be taken for granted, where even trips to the grocery store lead to adventure. In French Like Moi, Carpenter guides us through the merry labyrinth of the everyday, one hilarious faux pas after another. Through it all, he keeps his eye on the central mystery of what makes the French French (and Midwesterners Midwestern).

I have never watched locusts swarm a field of wheat, but I bet it looks a lot like Paris when the tourists arrive. Each year fifteen million of these creatures descend on the city, stripping the stores and restaurants bare, and since they squeeze their visits into the summer months and the central arrondissements, it’s surprising they don’t have to stack all the sightseers in human pyramids just to make room.

When the city is this thick with other nationalities, spotting an actual Parisian is something of a rarity, and if he or she happens to be especially endearing—that is, accompanied by a small and smartly dressed child, walking a dog, wearing a scarf, charging across cobblestones on stiletto heels, and/or displaying a look of purposeful exasperation—the appearance can elicit the kinds of oohs and shutter-clicks usually reserved for zoo exhibits of meerkats.

It’s a big responsibility for the locals to perform their nationality so relentlessly. Most theatrical actors get to move from one production to another, and if they’re unionized they even accrue vacation time. But for Parisians life is like indentured servitude to the Broadway production of Cats: you’re in it for the long haul. Only when you get home at night can you finally peel off the necktie that’s been chafing all day, mess up your hair, pull on the sweat pants, and crack open a beer while the TV warms up to reruns of America’s Got Talent. (I’ve always assumed the French lead secret lives as Americans.)

Because it’s such a burden for Parisians to keep the ball of Frenchness rolling, I sometimes chip in and give it a push, putting my years of cultural imitation to work. For instance, I’ll be walking across a bridge as a Bateau Mouche approaches. A gaggle of tourists will crowd the upper deck, their attention split between the Left and Right Banks, fingers pointing at spires and domes, the hum of voices audible above the engines. Meanwhile, a kid—usually a little girl—stands glumly at the front, elbows on the railing, cheeks wedged in the V of her palms. She reminds me of my own daughter—except for the weight of her sadness. Her parents are so busy capturing video footage of debris floating down the Seine that they’ve forgotten she exists. No, no, the mom is probably crabbing at the dad, you’re in selfie mode. Give it here. They fidget with the device, prodding with their forefingers. Meanwhile, the girl sighs, and for a brief instant, there’s only one person in the entire universe paying attention to her: me, glancing down from the bridge. Then it happens. She lifts her head and sees me seeing her. We exchange A Look. Slowly she raises her cupped palm to the side of her pageboy hair, and the hand wags back and forth in secret communication. Because I’m still a human being, I stop and wave back, trying to signal not just across the rapidly closing distance between me and the boat, but across the years, the decades. Don’t worry, I want to tell her. It gets better. I give a little nod to convey my sympathy. Yes, her parents are idiots. Her teachers don’t understand her. Her best friend has moved away. And even this trip, the family vacation to Europe, designed to bring them all together, and failing utterly, it too will fade to nothing, as will it all—except for this one moment, the few seconds during which she found understanding in the small wave of a man’s hand before her boat disappeared under a bridge in Paris.

Then one of the grownups, probably the dad, notices the girl and her raised hand. His face rotates in my direction, his nose pulling into a rabbit scrunch as he searches for the target of her attention. He spots me, my hand frozen in place. And I think, uh-oh.

In the States, it’s worrisome when a grown man waves to a little girl in secret. I figured the parents’ thoughts would jump to Lolita. And because during their boat tour they’d have learned about the Conciergerie—the place where Marie Antoinette spent her last days—they would take me there now so I could await execution, or castration, or whatever happened to be the punishment du jour.

Secrets of Paris will be hosting a live Zoom conversation between Scott and Heather Stimmler on July 11th at 1pm CST (8pm Paris time). The Zoom link and password to join will be posted here the day of the event (you can also enter your email there to receive a reminder).

Scott teaches literature and creative writing at Carleton College (MN). Winner of a Mark Twain House Royal Nonesuch Prize (2018) and a Minnesota State Arts Board grant, he’s the author of Theory of Remainders: A Novel (named to Kirkus Reviews’ “Best Books of 2013”) and of This Jealous Earth: Stories. His shorter work has appeared in a wide variety of venues, including South Dakota Review, The Rumpus, Silk Road, Catapult, and various anthologies. His website is sdcarpenter.com.

You can read Scott’s essays in Secrets of Paris here.

Recommended Reading: Half An Hour from Paris