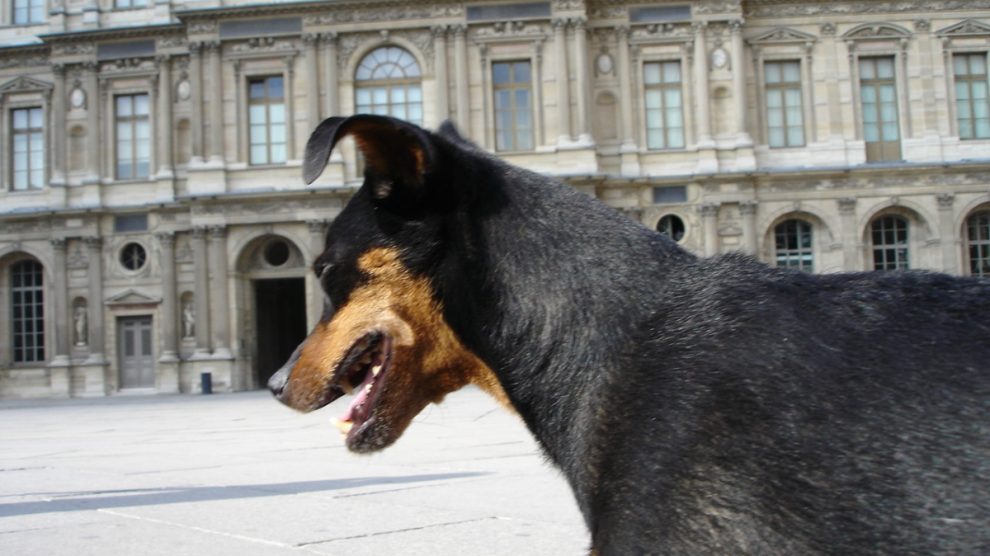 All of the clichés about dogs in Paris are true: the French love their canine friends! It’s a very dog-friendly place if you’re just visiting (and the weather is nice enough to spend a lot of time outdoors). If you’re moving to Paris with your pooch, or buying one here, be sure to read the free guide provided by the Mairie, Petit Guide du Maître: Bien vivre avec votre chien à Paris. It’s only in French, so I’ll try to paraphrase some of the important info here, along with general advice for pet owners in Paris (yes, even cats, if you must).

Where can you take dogs in Paris?

Restaurants, usually. Museums, never (not even closed in a doggie carrier). Post offices, bakeries, boutiques….depends on the dogs and the mood of the people working there. I take my dogs into places that supposedly don’t allow them, like the bakery, because I figure if smokers can pretend they’re blind to signs, then so can I (that and I always clean up after my dogs’ “merde” in public).

You can’t take dogs into food stores, but at the supermarket it’s generally okay to tie your dog up near the entrance (in a place out of the way, preferably). I leave mine near the carts when I go into Franprix and haven’t had any problems yet.

Legally, dogs aren’t allowed in the open-air markets either (although they certainly can’t keep the dirty pigeons out, so I don’t see the difference), but I’ve only been chastised once (and it was by the local police who happened to be at the market, not the stall owners).

You can take small dogs in the Métro and Bus only if they’re in a carrying bag (I let mine out while I’m walking around and put them in their bag during the ride, like in the photo). All dogs can ride in the RER if they’re in a bag or on a leash and muzzled. Dogs carried in a sac ride free, dogs on their leash have to have a ticket (child rate).

About half of the hotels in Paris accept pets, spread across every price category from no-star to the Palace hotels (which usually have extra-special pet services). Be sure to get written confirmation, though just in case.

Some taxi‘s don’t want dogs in their car, so it’s best to call and ask in advance. There’s an agency that specializes in transporting pets around Paris, called Taxi Dog, of course. Other dog taxis include Taxi Animalier and Taxi Canine.

Seeing-eye dogs can go wherever their owners go.

Where can you walk your dog in Paris?

Legally, all dogs must be on a leash in Paris, although you’ll often see very well behaved doggies following closely on the heel of their owner. Or not. I’ve had the unpleasant experience of someone’s German Shepherd attacking my dogs, so stay alert if you see other dogs off-leash.

There is only one sad little dog park in Paris (Square Jacques Antoine, at Place Denfert Rochereau, 14th). The majority of parks are completely off-limits to dogs, even on leash. You will see signs posted on the gates. A few allow dogs in part of the park, in specifically designated areas, like:

I’ve actually let the doggies off their leashes at Bercy because there are no roads nearby, and the elevated path that runs along the western end of the park from the cascading fountain to Bercy Village is perfect for jogging. I’ve been told the park across the Rue Bayard from the Parc Andre Citroen allows dogs off-lead, and it has become something akin to a dog park (I haven’t confirmed this).

Scooping the dog poop in Paris

The golden age of doggie doo doo on the streets of Paris is coming to an end. The pooper scoopers that once roamed the rues were finally removed (too expensive) and the city introduced the revolutionary idea of asking dog owners to pick it up themselves.

Word on the street is that 95% of owners say they pick up, but there are still some who either refuse to pick up, or who let their dogs run around off-leash and don’t notice when they poop (right). There are inspectors who will fine you on the spot…if they catch you in the act.

Some parks have free doggie sac dispensers, but it’s best to always carry your own. I use sandwich baggies (€1 a roll at any supermarket) or buy actual doggie sacs. They’re sold at pet shops like BHV’s pet store, La Niche (42 rue de la Verrerie, 4th) with a cute plastic bone-shaped dispenser your larger dog can wear. Buy them. Use them!

Legal Stuff for Pets in France

There are no dog licenses in France, but since 1999 they must be tattoo’d OR microchipped (puce électronique), and regularly vaccinated. The vet arranges all of the above.

The central office for dog tattoo records is the Fichier Central des Chiens Tattoués: 0810 778 778. Call them if you find a dog and can read its tattoo (usually on the ear or inner thigh), or if you want to get your dog tattoo’d and registered. Lost or found dogs without tattoos should be reported to the Gramont Refuge: 01 47 98 57 40.

Traveling with (or without) Your Pet

There is a helpful website called Wamiz which has information for anyone traveling with their pet or leaving them in Paris while traveling. It’s only in French, but has links and numbers for the Pet Passport, the Society for the Protection of Animals (to report abandoned pets), pet-sitting organizations and even a list of beaches in France where you can take your dog. Another site is Club Oscar, which bills itself as a sort of Dog Concierge Service (again, in French only), helpful for residents with pets.

There are a few dog walkers in Paris who can take your doggy to the park for the day or simply for a spin around the block. They tend to come and go quickly, and I haven’t tested them all personally, so make sure you get referrals.

Caninement Vôtre
Tel 06 70 21 24 09
Does your dog need to be walked while your at work? Let Cédric Cornevaux (a licensed animal handler) pick your doggie up at your home for a few hours of exercise and fresh air in the forests on the edge of Paris. More than reasonable rates, and he speaks English. Lena & Pedro spent many happy afternoons with Cédric!

Holidog will come and walk your dogs, feed your cats, or find a family where your pets can stay while you’re on vacation.

Chapacha
Cat owners will want to bookmark this site. The owner Céline Lorac is highly responsible and devoted to looking after cats (as well as ferrets, hamsters, etc.) in your home. Says one reader, “When we are out, she visits our cat who has diabetes and requires two insulin shots a day, ideally spaced 12 hours apart. He doesn’t always warm to strangers, but he gets along well with Céline, who even gets him to play (rare for this 14-year-old cat).”

CitizenDog is a team of five Parisian women who will walk your dogs in the nearby forests outside Paris. arrange for dogsitting and doggy training.

DogWalking.fr is another Parisian company that does neighborhood walks, forest walks, and kenneling services (although this is at the high end of the price range).

Zooplus.fr
I get my dog food from this website because they have 20 different organic dog food brands, the prices are reasonable and they always deliver within 5 days. Also products for cats, birds, rabbits, etc. French only.

Animalis
52-54 Cour St-Emilion, Bercy Village, 12th
Tel 01 53 33 87 35
M° Cour St-Emilion
This is the only location within Paris of this pet supermarket, with a good selection of all kinds of pet products and grooming services.

You can also find many pet shops along the Quai de Mégisserie (1st) and pet supplies (particularly for birds) on Sunday’s market at the Place Louis Lépine (4th, right at the exit of M° Cité). Grocery stores sell pet food and basic grooming products, and many gardening chains such as Truffaut have pet sections.

There are vets in every neighborhood of Paris, just look for the blue and white cross. Pharmacies usually carry flea and tick treatments as well as many basic dog medicines (upset tummy, etc.), so if you need a vet pronto, ask at any pharmacy for directions to the nearest offices.

VetoAdom is a Paris-based 24/7 emergency vet service which sends a vet to your home. I’ve used this service myself when my vet was closed on a Sunday afternoon. They are very efficient and came within 30 minutes. The visit is €63-€93 (depends on time) plus any fees for shots, medicine, etc. Pedro’s torn and bleeding paw cost €167 (and the vet will fill out the pet insurance forms and send a copy to your regular vet). Highly recommended. Tel: 01 47 46 09 09.