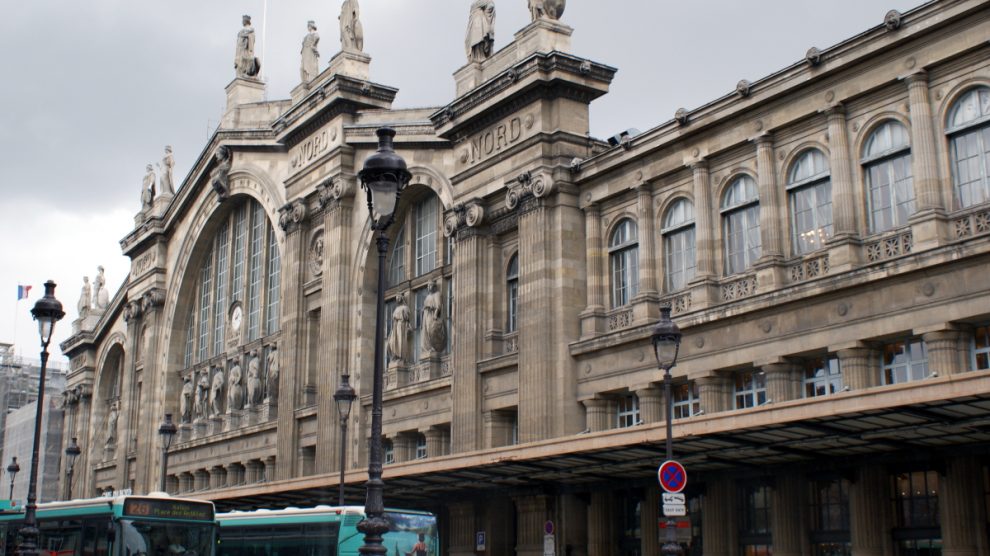 Of Paris’ five passenger train stations (Gare du Nord, Gare de l’Est, Gare St-Lazare, Gare de Lyon, and Gare Montparnasse), the Gare du Nord is the one that my tour clients use the most.  This is the station for the high speed trains including the Eurostar (Great Britain, Belgium, Northern France) and the Thalys (Netherlands, Northern Germany, Northern France, and Belgium).

Like most busy European train stations, it can be a bit disorienting for new arrivals from London or Amsterdam to navigate the facilities. Happily, they’re always improving.

– Bathrooms: all arrivals come into the main Grands Lignes platforms; the nearest bathrooms are one level down, right at the foot of the escalators on the way to the Metro or RER (in fact, you may see the ” M/RER” signs before you see the bathroom sign at the top of the escalator, so follow them if you’re lost). The bathrooms are very clean and cost €0.70, paid to the attendant at the desk who will give you change if needed, but now you can also pay by credit card, a lifesaver for those of you with no Euros (or no small bills/coins).

– Lounges: If you’re traveling by Eurostar you go up an escalator and through security to the dedicated Eurostar lounge (with bathrooms, dining, shops, seating). If you’re traveling by Thalys there is a new, dedicated lounge opened in July just outside the station, across the street from the taxi stand, at 22 rue Dunkerque. Other travelers can try and get a spot in the Salon Grand Voyageur (open 7am-9pm) or squat one of the few places to sit in the main hall (there are plenty of snack stands, newsstands, and some seating); don’t get there too early when it’s very cold because the platforms are open-air, thus no heating in the station.

– Left Luggage: If you need to store your suitcases or bags for up to 24 hours there is a Left Luggage service, aka Consignes, just across from platform #2 and down the stairs (photo below). If you walk too far past the first platform and along the wall, you’ll see a sign that says “Baggages”. DO NOT FOLLOW THAT SIGN, it’s for pre-checked bags (I found this out the hard way after following the signs all the way around the back of the station….creepy!). The Consignes lockers only take coins, the largest storage lockers are €9.50, smaller ones for €7.50 and 5.50 (one flat fee no matter how long they’re in there, up to 24 hours). The bill changer is very sensitive and took ten minutes to figure out, so if you can come prepared with coins you’re better off. Directions are in different languages. Make sure you get the receipt with the open code, and that you know the opening hours: 6:15am-11:15pm.

– Security: Although much has been written about the safety issues in train stations since the foiled gunman attack on the Amsterdam-Paris Thalys in August, there is no reason to be anxious about train travel. It’s one of the fastest, most comfortable and most efficient ways to get around Europe. The Eurostar is the only train service that currently scans baggage and checks passports (like at the airport), but you will see many police officers and armed military patrolling all of the stations in Paris. The biggest security risk is getting pick pocketed or having your bag snatched, so be vigilant about keeping your eyes on your belongings (because whatever isn’t stolen will likely be designated “unattended” and the entire station will close while they bring in bomb-sniffing dogs).

– Fun Shop: On a more positive note, one of my favorite new shops, HEMA, just opened on the lower level (bathrooms and metro/RER). It’s a good place to get rid of a few spare euros on snacks, stationary, beauty products, and travel gadgets.