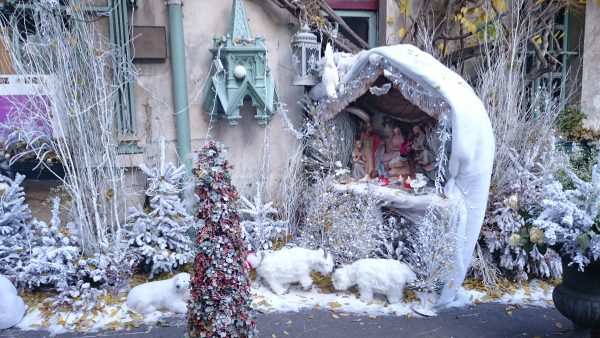 Ho! Ho! Ho! Joyeux Noël! It was flurrying again in Paris last night. Then it got windy and the flurries turned to cold rain. Winter is here, no doubt, and it’s not hard to try ignoring this weather with a little holiday fun. Mr. Hall and I are spending our first Christmas together in Paris, no travelling, no relatives, no visitors (we did all that last year).

Decorating Procrastination So far, we haven’t gotten very far in the Christmas decorating. We bought a few colorful balls for the tree at Eglise Saint Nicolas des Champs’ Christmas Bazaar (they call it a braderie), some edible chocolate ornaments wrapped in foil from Marks and Spencers’, and…well that’s it, so far. We were down in Mougins, which is between Antibes and Nice, and there was a very large Marché de Noël, but instead of buying decorations, we ended up with artisan nougat, garlic-flavored goat cheese, Corsican wine, and foie gras (yeah, we’re big suckers for local delicacies). Oh, and lavender-filled sachets for the closets, because you can’t go to Provence without getting lavender. But still, no Christmas decor.

Fuzzy Black Trees We’ve got the stockings from last year, and a few cards that have already arrived. Around Paris, the flocked and au naturel Christmas pines (called sapins de Noël) have appeared at the floral shops and outside a few supermarkets. I’ve never been a big fan of flocking. I think it ruins the pine scent. I’ve seen quite a few of them here, and not just white, either. There are blue, red, and black ones in front of a few places. I’m not making this up.

New Country, New Custom All I know is that it has to be a small tree to fit in the elevator and into our apartment. You won’t see too many 8ft. pine trees in Paris for sale. Maybe in the countryside. What you do see a lot of are those old-fashioned “stands”, the two pieces of wood in a plus-shape, nailed to the base. A piece of log cut into halved semi-circle, flat side down, tree placed into a hole in the rounded top. I haven’t seen any of the metal ones with the screws we used back home, which is fine with me. But how to keep it alive when you can’t water it? There are quite a few “live” trees sold, which would also solve the “Is it straight?” problem. I’m rather curious to see which one Mr. Hall chooses. By the time you read this, I will have had my wisdom teeth surgically removed, so I don’t expect I will be there to pick out a tree (but I’ll let you all know the differences between French and American dentistry in a future article).

Almost Like Home So that’s the tree. If I get really ambitious, I’ll go get some cloves and decorate a few oranges. Which reminds me of that “When we were children, we were happy to get an orange for Christmas” hooey that the grandparents told us if we wanted an Atari or a Swatch. I just read an article in the free Metro newspaper about Noël, and apparently the French grandparents say the EXACT SAME THING! Scurvy must’ve been a real killer in the early 20th century. Another holiday gripe we all have in common with the French: they hate Christmas shopping, too. Since the commercialism craziness is still only 10% of that in the US, I usually don’t find it too troublesome myself. Another similarity between cultures: they watch the “Wizard of Oz” on Christmas day. Sure, I used to watch it every Easter as a kid, but it’s close enough.

Christmas à la Français So what makes Christmas Noël here? There’s the Bûche de Noël, a sort of Yule Log-shaped chocolate cake roll, with cream inside. There are a lot of variations, but you know it when you see it, and if I ever get back to the States, I’m going to try to get this Bûche to replace the fruitcake. It wouldn’t be hard. Mr. Hall tried a miniature one in a café, and he’s sold. Another big tradition for Noël is the miniature nativity scene, or crèche. France is mostly Catholic, so this is no big surprise, but they have made an entire industry out of this with the santons, little figurines for creating an entire village around the nativity. These are made in Provence by skilled artisans, usually from clay.

It Wouldn’t be France without a Feast Midnight mass on Christmas Eve is still popular with the Catholics here, and afterwards is the Réveillon. This is a huge feast, lots of good food, wine, and desserts, usually just for the family. It’s a bit like Thanksgiving in the States, except that the main dish varies in each region. For more about Noël traditions, check out the cute page, in French and English, for Canadians and French, on the site Christmas Traditions.

More Stories A nice little site with Christmas stories from all over the world, Christmas.com has a very cute description of the non-religious French characters Père Noël (Father Christmas) and Père Fouèttard (Father Spanker). For some other Anglophone opinions on the Christmas season in Paris, check out articles in Bonjour Paris and Café Metropole.

The French still flock their trees, but that’s probably to keep the needles from falling off as it dies, since they still don’t put the base in water (although they usually don’t put up their trees until a week or two before Christmas anyway). Unfortunately the shopping frenzie of the US has grown in Paris, and stores even advertise “Vendredi Noir” even though they don’t celebrate Thanksgiving so most aParisians just roll their eyes at the marketing attempt. The dinner feast with family is still the most important part of Christmas in France, and now that shops are open later and on Sundays, it’s a lot easier to stock up on last-minute items.