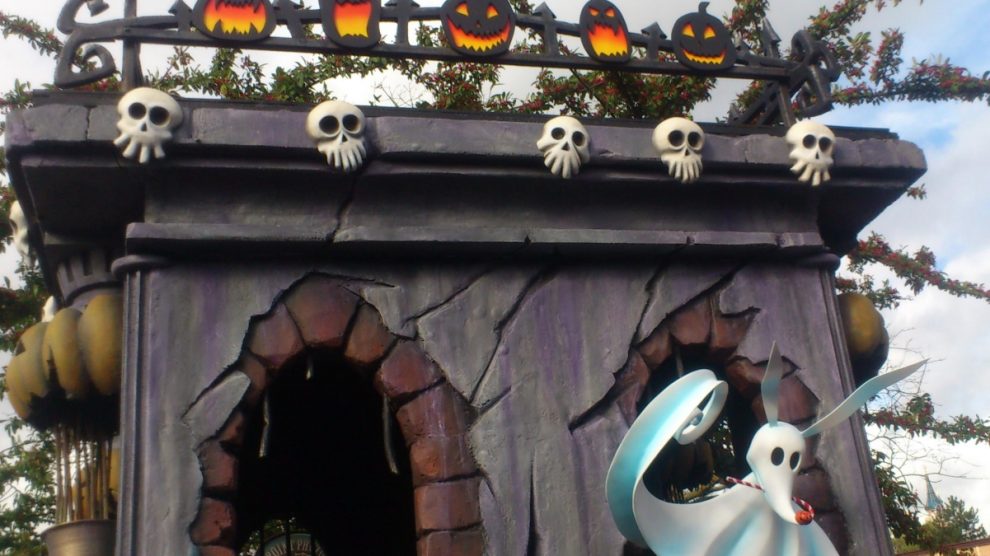 Yesterday I went to an English supermarket in Paris and picked up two adorable little pumpkins. They even had stickers detailing in French how to make a Jack-o-Lantern. A French woman at the checkout line asked me what they were for. “Halloween,” I said. “Do you eat them?” she replied.

The French really, really, want to eat the pumpkin. Because they’re new at this Halloween thing, and have their own cult of culinary craft, I’ll forgive them. Besides, they’ve come a long way since I was a student in 1995, when only a few American bar ads mentioned Halloween. My friends and I, dedicated Halloween fans, knew there’d be no trick-or-treating in this town of secured buildings, so we dressed up and headed to a night-club, sure that we’d find a party there. My friend was dressed as a ballroom dancer in a long gown and glittery eyes, a number pinned to her back. I was a dandy, with a fake moustache and my hair tucked under a top hat. My roommate decided to be a ‘French Girl’, and thus wore a striped shirt, beret, red scarf, and black fishnet stockings. By the looks of the folks in the Metro, I don’t think anyone realised we were in costume. The only other Halloweeners we saw, a group of vampires and witches, stared at us silently. It’s a bit difficult to explain to someone how, when you’re expected to wear a costume every Halloween of your life in America (if not, you’re a bore), that one must get a little more creative than the witch-vampire-zombie-monster schtick.

Since they didn’t grow up carving Jack-o-Lanterns and eating caramel apples, I guess I can excuse them for obsessing about Halloween’s cultural significance and historical roots. I do, however, get patriotically defensive when I hear them accuse Americans of using Halloween to destroy their culture with our commercialism. Whoa horsies! Can’t we all just get along? Then again, the French tend to take themselves and their dead rather seriously on November 1st (All Saints’ Day), so it must raise their hackles a bit to have a bunch of strange goons running around until dawn the night before, foam tombstones with tasteless epitaphs written on them decorating our yards. But Halloween is about fun, fall leaves, spooky haunted houses, ‘The Great Pumpkin Charlie Brown’, costumes made from stuff in grandma’s closet, trick-or-treating, pillowcases full of candy…makes me homesick for candycorn!

Mr. Hall, my English husband, admits to a few trick-or-treating outings as a kid, but apparently Halloween isn’t quite dignified enough for the British psyche. A few years around me should get him up to par. Just last year we ventured over to Halloweenland at Disneyland Paris, which, with the Phantom Mansion, is the closest thing to an authentic Halloween event as I’ve found in Paris. American uber-commercialists Coca-Cola are holding their Halloween party in the Zenith stadium, which I’m sure will be horrifying in its own special way, but most activities in Paris seem to be at Anglo bars and a few clubs. Cafe Oz, Lizard Lounge, and Cruiscin Lan (for the late-night zombie crowd) are known for their Halloween parties, costumes exigé. New Morning is hosting Salsa’Lloween, while at Divan Du Monde there is Halloween Africa. If you’re a horror film fan, the Cinema Racine Odeon’s ‘Nuit Halloween’ starts it’s horror-fest at midnight, serves up breakfast, and holds a costume contest to win year-long movie passes. For those sicko’s who dig the grotesquely erotic and horrific illustrations of Denis Grrr (yes, three r’s), there’s an exposition of his work at the Kata Bar.

To prepare for the big night, the best Halloween site in France is at http://www.halloween.tm.fr, where you can shop for costumes and decorations, send postcards, read Halloween history and the Top Ten Reasons to Hate Halloween (they also list a few dozen reasons to love it, too). The best part of this site is the chat forum (in French only), where the French debate the virtues of Halloween, ask each other for party planning tips, and ask for pumpkin recipes. You in-the-know, with decent language skills, could log on and give ‘em a few pointers (‘You don’t eat the pumpkin. Not yet, anyway.’). Another site that embraces a cosy Halloween feel with its wonderful graphics is at http://www.lafete.net. In French only, this site has a good shopping area, historic explanations, kids activities, and a garden section devoted to—you guessed it! —the pumpkin, with a list of pumpkin festivals in France. One of the larger costume stores in Paris, L’Amicale, has a very flashy site with spooky sounds and graphics where you can see some of their costumes, get their address, and read even more about Halloween tradition (i.e. ‘Why a Pumpkin?’). So there you are, armed for your foray into ‘Alloween à la Français. If you encounter any Parisians eyeballing a Jack-o-Lantern hungrily, tell them the pie can wait until Thanksgiving. And if any of you come upon a good Haunted House, let me know!

This article about Halloween in Paris is a good reminder that even 20 years ago the French were trying their hardest to intellectualize this very American holiday. Just today my Frenchie sent me an article by a renowned psychologist explaining why humans feel the need to scare ourselves (horror movies, roller coasters, Halloween). They still don’t approve of “not-scary” costumes here, but Halloween has infiltrated pretty much every corner of Paris, with haunted houses, themed candies, and decorations and costumes much easier to find. Note that the websites (like many of the bars) mentioned no longer exist. The man who owned “haloween.tm.fr” actually tried to trademark the use of Halloween in France. It didn’t work. 😉 Happy Halloween!

PS: This was before digital cameras were common, don’t judge my clipart jack-o-lantern!