Home » Commentary » Lockdown in Paris: Day 55 – One Foot Out the Door 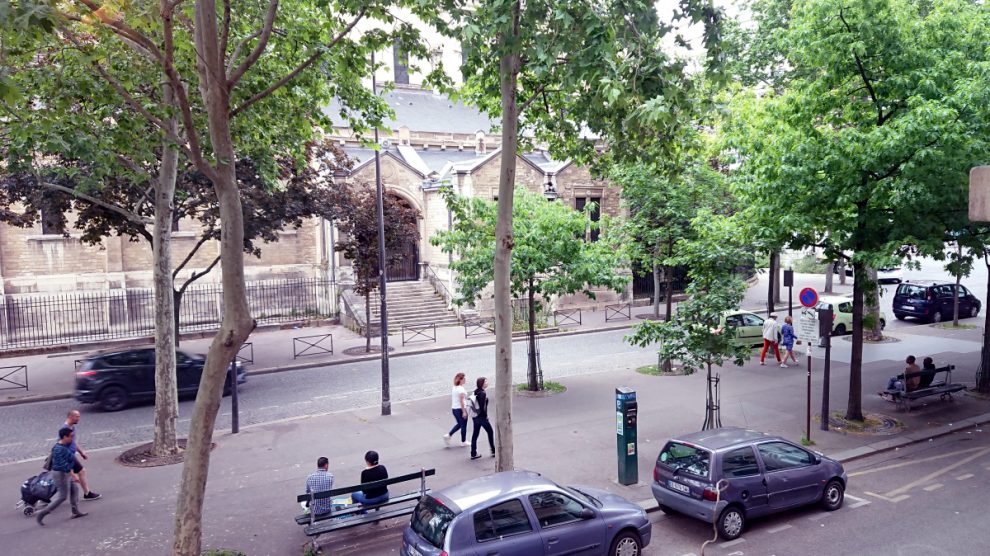 Today is a national holiday in France celebrating the 75th anniversary of VE Day, or the end of WWII in Europe. But with just three more days until the leash is loosened on the French population from our Coronavirus confinement, Parisians are more distracted by what they’ll be doing on May 11th. As of this morning there have been 25,987 deaths in France from Covid-19, so the government continues to stress the importance of remaining vigilant while the virus is still circulating. But with the number of hospital patients on life support down to 2961 – the first time it’s gone under 3000 since the start of the pandemic in March – it’s easy to be optimistic, and Parisians are already out in force on the benches and squares of the city enjoying the lovely weather.

“Victory in Europe” 75th Anniversary and Passing of a WWII Heroine

France celebrates the end of WWII in Europe every May 8th. There was supposed to be a big event on the Champs Elysées for the 75th anniversary, but authorities considered it too risky to expose the few remaining veterans to travel and contact with the public during the pandemic, so there was a very restrained ceremony at the Arc de Triomphe with President Macron and former presidents Hollande and Sarkozy. One of the major heroes of the French Resistance, Cécile Rol-Tanguy, actually passed away earlier today at the age of 101. Widow of Colonel Henri Rol-Tanguy, head of the French Forces of the Interior (FFI) of Île-de-France, she was at the forefront the Liberation of Paris, transporting important messages between Resistance units – usually in her baby’s stroller — to coordinate defenses for the arrival of General De Gaulle and allied soldiers. I recommend reading more about her fascinating story.

I shared the general outline of the May 11th deconfinement rules for Paris in my last post. Today the authorities have given us more specifics:

– The Bois de Boulogne and Bois de Vincennes will both be open starting Monday, as well as the Champ de Mars, the quays of the Seine, and the Esplanade des Invalides. However the parks and gardens in Paris remain locked while the city is still in the “red zone”.

– All shops are allowed to open on Monday except for the department stores and shopping malls over 40,000m². So that means BHV, Le Bon Marché and the small Galeries Lafayette on the Champs Elysées are open, but the Haussmann department stores (Galeries Lafayette and Printemps), the Forum des Halles, Italie 2 and Beaugrenelle will remain closed. UPDATE: Beaugrenelle reopened May 19th.

– Restaurants, bars and theatres remain closed, but take out and delivery are still possible (Paris by Mouth has a great list here).

This Burger King by Quai de la Gare metro in the 13th has announced its “Burger Klean” program to reassure the public with a bit of overly-cute marketing (“The only thing contagious here is the desire for a Whopper”)…I’ll pass until they start serving Beyond Burgers like they do in the US.

The metro and RER will be running at 75%, with 240 of the 300 metro stations open (the largest to be closed is République). There are strict rules (with fines of €135 for breaking them):

– face masks will be required (washable fabric ones will be distributed to passengers in the first days, especially if you’re a Navigo pass holder, but best to bring your own to avoid waiting in line for one)
– only those with a note from their employer are allowed to travel during rush hour (6:30-9:30am and 4-7pm)
– there are stickers on the floors to show where you can sit and stand to maintain distance between passengers in the cars and on the platforms
– there will be hand gel dispensers in metro stations, at bus shelters, and the outside of the public toilet kiosks
– 45km of extra bike lanes within Paris are still being created, so not all will be open by Monday, but the Rue de Rivoli will continue to be reserved for bikes only until further notice from the Mairie (note: if you need your bike repaired, try http://www.helpmybike.fr/)

We’ll see if this turns into a cross between Musical Chairs and Twister when everyone scrambles for the few designated standing spots.

If it’s not already clear, you’re going to need to get your hands on some masks, either disposable surgical masks or reusable fabric ones. The Ile-de-France will be distributing over 4 million masks for free, but if you’re not struggling financially then leave these masks for those who can’t afford to buy them (especially since a half million masks on their way to Paris were stolen from a truck at the Spanish border last night, so that’s going to make the government’s job that much harder to replace them). You may have to visit two or three pharmacies or convenience stores before you find one, but they’re hardly scarce now that production has ramped up, and you can also order them online like I did (more fashionable ones available from this Parisian boutique, Marquise de Laborde).

The Minister of the Interior Christophe Castaner said restrictions on travel within Europe (Schengen countries and UK included) will remain in place until at least June 15th, while borders beyond Europe will remain closed “until further notice” (unless of course you work in another country, in which case you’re allowed to travel there and back). Perhaps the first good news I’ve heard about this summer was Mayor Anne Hidlago’s announcement in an interview with AFP that Paris Plage will take place this summer, although in a more condensed and restricted fashion to maintain the necessary distance between visitors…Paris Plage Lite, if you will.

Secrets of Paris has always been about Paris, and helping you discover its hidden secrets. This Paris under Lockdown series has been one of the few detours from that mission, where I’m sharing much of my personal experience of confinement instead. And although I’m sharing more of my private life online than I’m usually comfortable with, there’s not much else I can offer while trapped behind my window for days at a time and constrained to a 1km radius of my shoebox in the 13th arrondissement for almost two months now. For those of you who have shared your own personal stories in kind, I thank you for your support. For those of you feeling just as awkward as I am, don’t worry, we’ll be back to the regular programming now that I can venture beyond my neighborhood again. Although Paris will only be partially released from total lockdown on Monday (provisional release for good behavior, bien sûr), the city will still only be partially open for the next few months. Moving forward we’ll be focusing on what you CAN see and do as each week goes by, so that by the time the borders finally reopen, you’ll be ready to make up for lost time!

In the meantime,enjoy one last “What we had for dinner” photo, featuring Fred’s tarte à la tomate et à la moutarde! – Heather