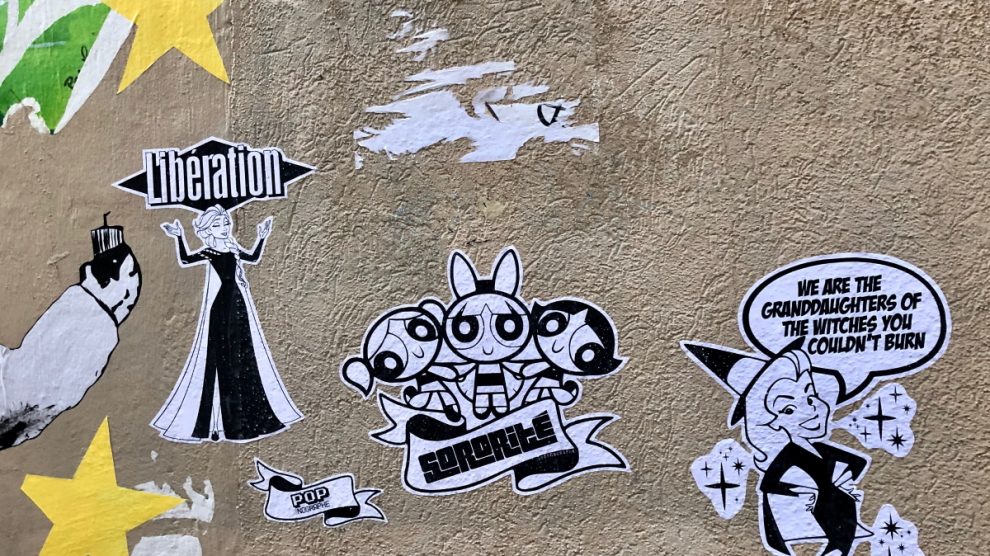 When some Parisian feminists find the social and political scene troublesome or oppressive, they take to the streets – to create art.

Julie Marangé, co-founder of Feminists of Paris with Cécile Fara, took a group in search of feminist street art on a walking tour of Butte-aux-Cailles, a neighborhood of artists and political activists in the 13th arrondissement of Paris.

Following the narrow streets of this hilltop village within a city, the group found vibrant displays of posters, stencils, paintings and even mirrors calling out for gender pride and equality in everything from education to sexuality. It appears to be an every changing exhibit with new works overlapping or squeezed into spaces between older ones, covering walls, doors and shutters. Each surface displays amazing vitality as the eye takes in the different styles and messages of each artist.

Julie explained stencils and posters are a practical way for artists working without permits to put art on a wall quickly and avoid getting caught. They can also be replicated numerous times, such as the small designs of vulvas and clitoris that kept reappearing.

Small mirrors placed throughout the neighborhood intimately invite woman to celebrate their reflection. Yet, some of these mirrors have been broken, cracked or covered with paint. Posters also have been damaged or the message edited creating interactive overlays of debate or dissent, ironically revealing the reason artists created art with a feminist message in the first place.

Other walls display single works, such as the larger stencils by Miss.tic, which portray her stereotypical vision of feminine beauty with written statements questioning such narrow stereotypes and calling for women’s power, as well as joy. Like many street artists, Miss.tic has a street moniker and style distinguishing her art.

Portraits of women of color remind the viewer of the complexity of discrimination these women suffer.

Last year, LOUYZ was the first woman commissioned to paint a large mural in Butte-aux-Cailles. While the mural doesn’t have a feminist theme, her work is celebrated as a “first” for women artists.

Julie’s knowledge of the historical and political context of feminist street art and its artists were comprehensive and entertaining. I look forward to returning to see the ever-changing art in Butte-aux-Cailles and taking other tours offered by Feminists of Paris, maybe the one of Montmartre next.

About Feminists of Paris Tours

Tours are available in English unless specified French.

Learn more about Feminists of Paris or book your tours directly on their website: www.feministsofparisen.com

Photos and Text by Secrets of Paris Contributor Anne Daignault