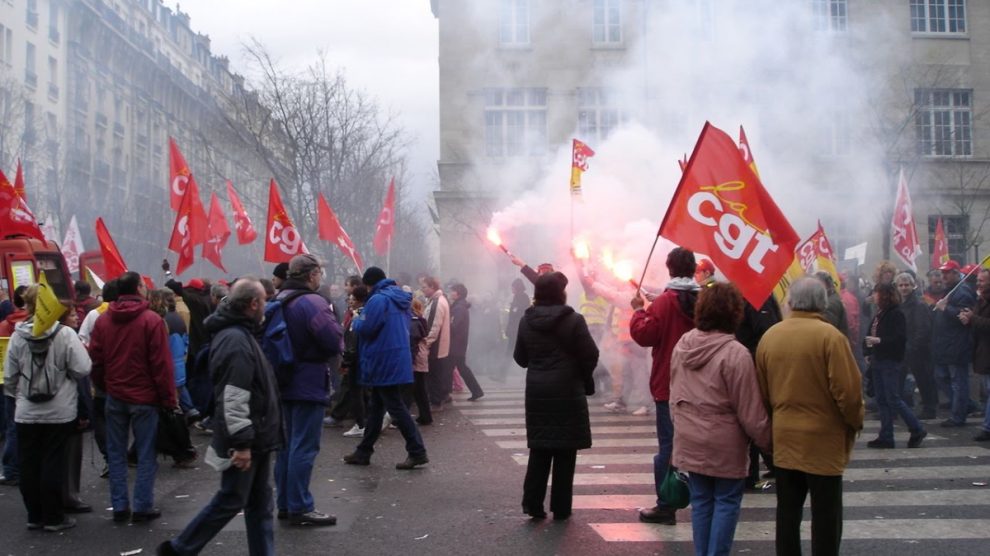 A few of you have asked me for more Paris strike photos (old ones here), so here are the pics I took on Tuesday April 4 from my window overlooking the Place d’Italie.

The day’s protest march finished at this square, and for the most part the protesters dispersed and went home as soon as they arrived. It was eerily quiet, and the entire square and all of the roads branching off of it were heavily policed to prevent any “casseurs” from vandalizing the neighborhood or harassing the peaceful marchers.

Here’s the Avenue des Gobelins and the Place d’Italie in the background. The police blocked off all of the surrounding streets to keep an eye out for troublemakers. The general public were still allowed to circulate freely.

A close-up of a group of CRS (riot police) preparing to contain a group of particularly rowdy marchers (with fireworks) in front of the Mairie du 13ème (town hall of the 13th). There are still people walking around, eating in the café across the street, walking dogs (that’s me).

Closing ranks…another close-up of the CRS during the height of the march. Most of the arrests were made by plain-clothes police (and dragged into the vans).

This is the square of the Sorbonne University (covered in renovation scaffolding), blocked off with a metal fence by the police after they removed the students who were inside. The surrounding shops were still open and only two police stood guard outside. This was taken Saturday April 1.

The Gap on the corner of the square was closed for a week (it just reopened today) after vandals accidentally set the entrance on fire during their blockade (they were trying to set a police car on fire, but there’s just no telling where a Molotov Cocktail will stop when you roll it).