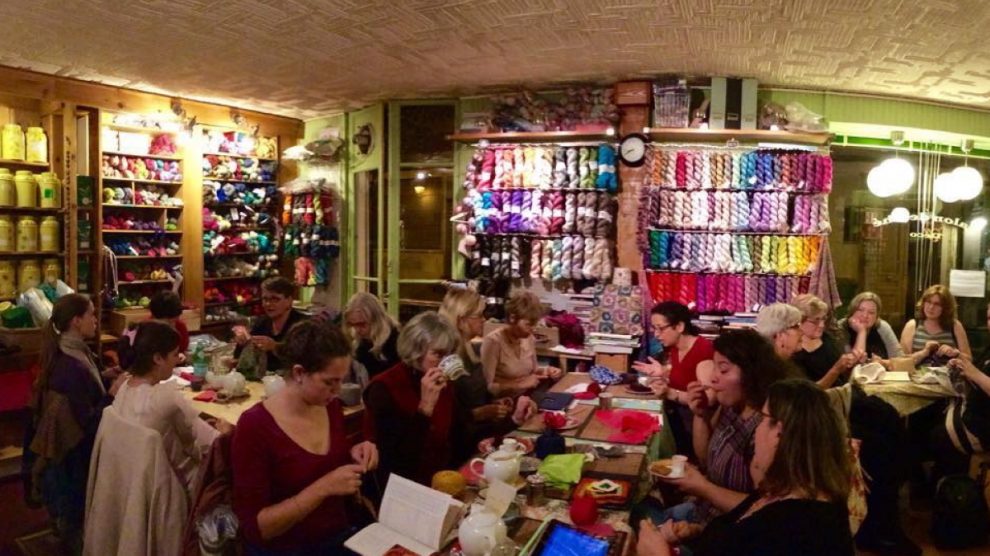 How someone who knows nothing about the world of knitting, sewing, notions and needlecraft discovers the international “kniterati” and the New Zealand expats who have written the definitive insider’s guide to the fiber arts community in Paris.

Everything I know about the world of “fiber arts” I learned in a little seaside town just outside Seattle called Port Townsend. In October I was there visiting a high school friend who had recently taken up crocheting with gusto, so I thought it would be fun to bring her some yarn from one of the boutiques here in Paris.

I’ve had tour clients ask about sewing, knitting and embroidery shops over the years, so I knew of a few picturesque boutiques. But as usual, I had too many last-minute errands to run before my flight and didn’t have time to go all the way across town to shop. Then I remembered L’Oisive Thé, the cute little tea room near me on the Butte aux Cailles, also sold knitting supplies. I checked their opening hours and found that they also had a boutique La Bien Aimée that originally opened just a block away (but is now a few blocks past Place d’Italie), so I popped in and was suddenly faced with three walls stacked with colorful yarns of different brands and prices. Like art supplies, I get all mesmerized by the colors and textures, but have no clue what to do with them. I admitted my total ignorance to the friendly shopkeeper. “Is there anything here she couldn’t buy in the US? Possibly made in France?” She helps me choose a few pretty, hand-dyed wool yarns from France. I wrote a little post about it before I headed overseas, prompting a few “You should do knitting tours!” comments from friends. I thought it would be a fabulous idea for someone who actually knew about knitting, and promptly forgot all about it as I departed on my much-needed vacation.

In Port Townsend there are three yarn shops in the historic harbor town of just under 10,000 residents. My friend (who seemed happy with the French yarn) invites me to her local knitting night at Bazaar Girls, where a multi-generational group of ladies (and two gentlemen) drink hot toddies around a big wooden table while working on their projects. They patiently answered all of my dumb questions about the difference between knitting and crocheting, the difference between natural and synthetic yarns (the latter they called “dinosaur wool”, because it’s made from fossil fuels), and how long it would realistically take me to learn how to knit my own socks (related to my own “project”, a pair of expensive knee-high wool socks that needed darning before the winter). This is where I first hear the all-inclusive phrase “fiber arts” which comprises knitting, crocheting, embroidery, sewing, etc. With my newfound knowledge I actually considered taking up knitting myself, but I already have too many expensive hobbies (running shoes aren’t cheap), so I quietly shelved that idea next to the knitting tours.

A Wonderful Discovery in Paris

Back in Paris I still follow my friend’s crocheting projects on Instagram. In early February she tags me in a post she following about a new guide book to the Parisian fiber arts shops, Stitching Up Paris. I immediately check it out online, holding my breath – would it be yet another half-baked, generic list full of bad clichés written by some opportunist who “visits Paris all of the time”? Happily, I think you already know the answer to this. Nothing makes me more excited than promoting the work of people sharing their passion and expertise with the world, and Stitching Up Paris is truly the “insider’s guide to Parisian knitting, sewing, notions and needlecraft stores” it claims to be, but it’s also so much more.

Meeting with the Paris “Kniterati”

First you should know who’s behind this wonderful little guide, Barbara Cattoni and Keiry Belton, native New Zealanders who met through Ravelry (which is like the Facebook of the fiber arts world with millions of members around the world). Keiry has been living in Paris for four years and writes about knitting and expat life in her blog KeiryBeesParis, while Barbara has living in France for over 30 years and has been giving custom, private tours of Parisian knitting, sewing and needlework shops for almost five years. I met up with the ladies on a rainy afternoon at L’Oisive Thé. They are wearing beautiful sweaters they made themselves, of course. “We didn’t have any experience as writers and publishers, but I know knitting and yarn shops, Barbara knows knitting and sewing and embroidery and all of the shops,” says Keiry, “The knitters here have become my friends in Paris, my network who I practice my French on, so we are part of the community.”

Their guide includes 65 carefully-chosen addresses in Paris and the immediate suburbs (particularly for the flea markets). “We don’t include shops that don’t have a lot of French things,” says Barbara. “One of the most popular shops in Paris is all ‘Made in China’. We also kept shops where we thought people would receive a nice welcome, shops that are not too intimidating.” The shops are divided into chapters by type: knitting and yarn; fabrics and sewing; embroidery; haberdashery, notions, and passementerie; vintage and Shabby Chic. There is a glossary and translations of essential words, including US and UK differences.

But these ladies didn’t just list the usual guidebook info (that almost anyone could do online these days). Barbara already knew most of the shop assistants from her tours over the years, but for the book they actually contacted the owners and scheduled meetings where they could take photos and get more in-depth information (aka “primary research” in journalistic terms). “The French people were wary of me, but they already knew Barbara,” says Keiry. “It would start out as an interview, and it would very quickly turn into a conversation with a friend about knitting, sewing, embroidery, colors, yarns…” It makes for a much more interesting read, as you discover the origin of the shop’s name, or how the owner became passionate about the craft.

These detailed shop descriptions would be enough on their own to make this book worth buying, but there’s so much more. Throughout the book you’ll find Neighborhood Notes with sightseeing recommendations close to the shops (including a museum where some of the earliest sewing machines are displayed), historical notes about different kinds of French fabrics, related culture (like the French film Le Cri de la Soie), listings of craft fairs, etiquette tips for taking photos at the flea market, sewing cafés where you can rent a machine by the hour, knitting meet-ups around town, and even detailed shopping instructions to help newcomers navigate the legendary (and infamously complicated) boutique La Droguerie. You learn so much about Paris from a completely different viewpoint that it’s an interesting book even if you’re not into fiber arts (like me) or don’t plan on visiting Paris anytime soon (as the ladies point out, many of these shops also sell their goods online, too).

Where to Get Your Copy

Barbara and Keiry published the book themselves in 2016, but you would never guess it by looking at it. They took the photos themselves, but hired a professional editor to go through the text and a design company in New Zealand for the cover and layout. Stitching Up Paris is a pretty little book, beautifully designed with color photos and high-quality matte paper, light and compact enough to stash in a large purse or tote bag.

2020 Update: The book is now officially out of print, however you may still be able to find it in the shops listed on their website or possibly used copies online.

If you’re coming to Paris, don’t hesitate to book a private tour of Paris fabric knitting and needlecraft stores. Originally started by Barbara, now that she has returned to New Zealand the tours are conducted by Pauline Geneteau. She can customize them to match whatever you’re interested in, from haute couture fabrics and vintage notions to buttons and every kind of yarn. And it’s not a problem at all if you’re just looking. “There’s never pressure to buy, we don’t get commissions,” says Barbara. “It’s not in our culture.” Taking a tour also helps you really connect with the locals who share your interests.

“Everyone has an idea that French people are rude,” says Barbara. “So what I like is taking them into a shop where they get into a conversation with the shop assistants about a project. I took an Australian lady — very good embroiderer — to a button shop, and she said to the shop assistant after chatting for a bit, ‘Can I show you what I do?’ So she pulled out this piece of embroidery, and the lady from the shop nipped out the back and got her embroidery, because that’s what she did, too, and they had a great conversation. And that’s what knitting and sewing does with people.”

If you’d like to join the local “kniterati” for weekly Dinner & Knit Night at L’Oisive Thé, check out their Ravelry group (“l’oisivethé et la bien aimée”) and sign up as soon as the event is posted, it fills immediately! My friend from Port Townsend will be visiting Paris this fall, so I might have to learn a few stitches myself so we can go together, completing the full circle (there’s probably a knitting/crocheting term for that…).

Knitting and Yarn Shops in Paris by Arrondissement

For those who can’t get a copy of the guide, here is a “just a list” (sorry!) of some of the most highly-recommended yarn shops in Paris. These aren’t the only ones you can find in Paris, but they either have a certain charm or carry unique products (I’ve left out the chain shops that seem to carry mostly synthetic yarns). New suggestions welcome!

The Honey, the Hound and the Hydromel: A Parisian’s Passion for Urban Beekeeping