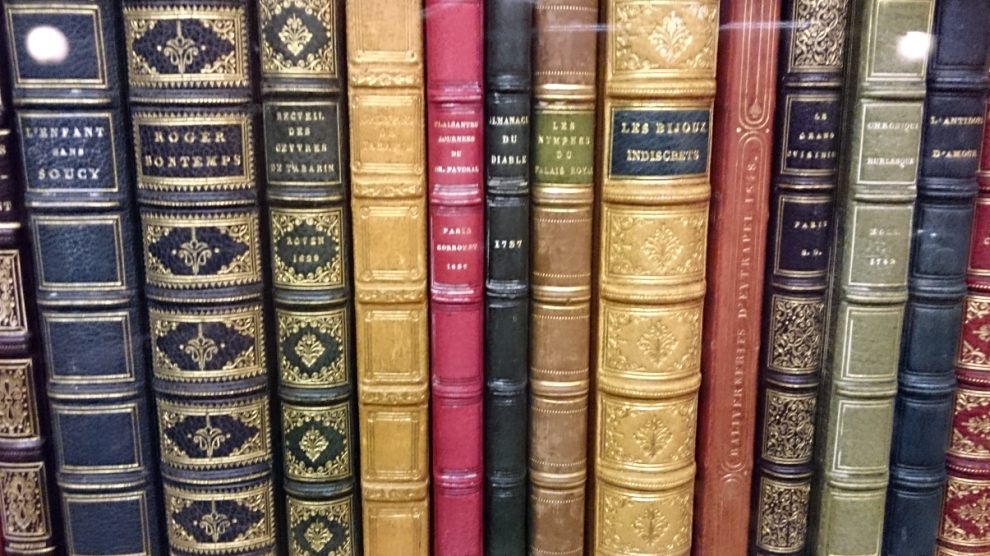 One of the best parts of being an English speaker in Paris is the abundance of literary opportunities available throughout the city. Paris has always been a cultural mecca and often the temporary or permanent home of many English-speaking writers, from Ben Franklin to Mark Twain to the Lost Generation and beyond. Ernest Hemingway captured the imagination of worldwide readers like no other, and people come from all over to experience “Hemingway’s Paris.”

There are plaques on the buildings he once lived in, tours dedicated to his old haunts, lines that queue up outside Cafe de Flore and Les Deux Magots so people can drink a coffee where Hemingway once sat.

On November 14th, Michael Katakis (left in the photo), American photographer and writer, and manager of the Hemingway literary estate, brought Hemingway’s Paris that much more to life. Mr. Katakis spoke about his new book, Ernest Hemingway: Artifacts on a Life, an event sponsored by the Abbey Bookshop and held at the Eglise Saint-Severin parish hall around the corner from the shop. The shop’s owner Brian Spence (on the right) introduced Mr. Katakis, who read excerpts from his new book and took audience questions.

Mr. Katakis was an engaging and knowledgeable speaker. He conducted his research on Hemingway at the John F. Kennedy Presidential Library in Boston where the legendary author’s personal papers are stored. Mr. Katakis and a team of two assistants spent two and a half years going through every piece of paper in the archives, something that had never been done before. His new book is an account of Hemingway’s personal life as told by the papers he left behind: tickets, notes, bills, photographs, letters and telegrams. Hemingway’s son Patrick, and grandson Sean, also contributed to the book and provided personal anecdotes. The ambition of the project is to give us a better understanding of Hemingway as a person, to bring us closer to and humanize the man behind the myth.

As a presenter, Mr. Katakis was particularly personable and informative. Audience members asked questions on a range of subjects and Mr. Katakis provided answers with a seemingly limitless store of knowledge. Subjects ranged from the myth of Hemingway as a macho man to his health and suicide; from his friends, wives, children, and social life to his writing habits.

While there have been many biographies written about Hemingway, this book, with its emphasis on Hemingway’s personal effects and photographs, reveals a side of the man not seen before. Mr. Katakis serves his role as Hemingway’s estate manager well with this book, and the evening was a delight.

For those who haven’t yet discovered this hidden Paris secret, the Abbey Bookshop on Rue de la Parcheminerie could be something out of Harry Potter. Its ceiling-high shelves are stocked with all kinds of books, its narrow hallways stretch back into secret nooks and crannies hiding even more shelves, even more books. The basement, down a steep flight of stone steps, holds non-fiction books, and travel books line the stairwell. Brian Spence knows his shop and its contents like the back of his hand, and will order books for you if he doesn’t have them in stock. So, along with the treasures waiting in this new and used bookstore, you can get new books on order. And on chilly winter days there is always a pot of hot coffee next to a stack of paper cups to welcome visitors as they browse.

For the latest author events, check out the Abbey Bookshop’s FB page: https://www.facebook.com/abbeybookshop/

Yvonne Shao is an American living in Paris. She blogs at Escaping the Empty Nest

BOOK EXCERPT: A Taste of Paris by David Downie

Advance Peek into “Pancakes in Paris”