Home » Practical Paris » Getting Around » Cycling in Paris: An Update 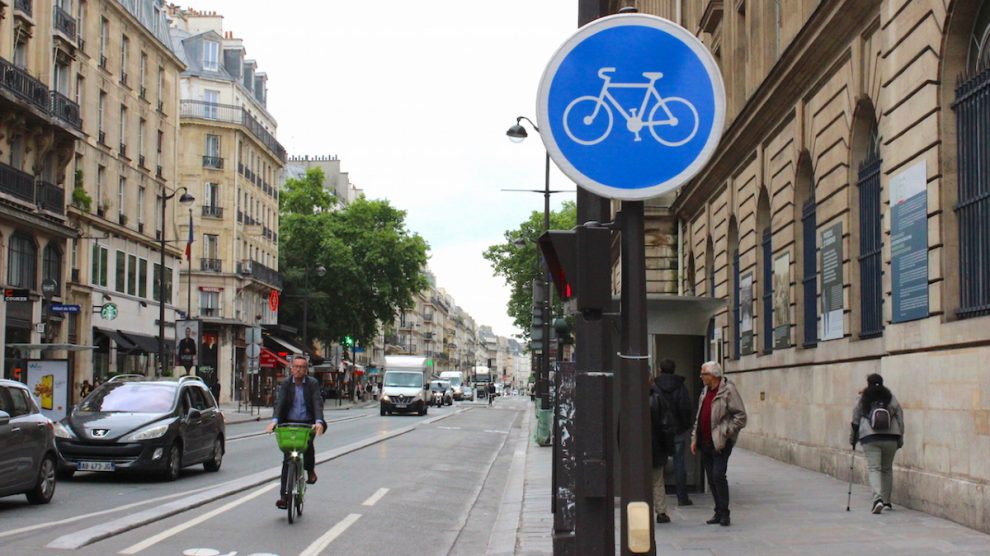 I’m not in London anymore. When I moved back to Paris after a year and a half in the UK, this became clear on many levels. The baguettes. The smoking. The cafés. It was all just as I had left it — almost.  One of the most striking difference was as I hopped on my bike to whisk off to some social engagement where I realized that Paris’s cycle culture had changed enormously, and mostly for the better.

As I rode along the streets, I noticed three distinct changes that show how Paris is embracing cycling. They are good to know if you are thinking about spending some time on two wheels while here.

First, the bike lane expansion has made it easier than ever to get around town. New thoroughfares  have created designated cycle paths along rue de Rivoli that street to the BNF in the east and all the way to Place de la Concorde in the west, with a short stint along the now-pedestrian Berges de Seine.

This east-west axis means I can cycle more easily without having to share lanes with buses or taxis. It also means that the infernal scooters and motorbikes that sneak into bike lanes can’t follow me as I pedal along.

Construction all over town is revealing new cycle lanes, and it all feels, overall, well-conceived. There is a bit on rue de Rivoli where the cycle lanes, on the left side of the road, all the sudden switch to the right side, preventing seamless commutes. Hopefully this will change over time. Overall, it’s quite the improvement.

It’s not nerdy to wear a helmet anymore! In fact, I see them all the time. In London, cycle culture demands such safety gear. They also sport a lot of Lycra, which I can do without. But safety first! Even Londoners using the bike sharing system usually wear a helmet. Paris, however, had always been a helmet optional city, but it’s changing.

Safety is important for cyclists, and it’s exciting to see how many Parisians are taking it seriously. While those using cycle sharing schemes might not always pack a helmet, those with their own bikes are taking precautions more and more. I no longer feel like the weirdo who brings his bike helmet to the café.

Almost ironically, it’s interesting to see how many more people seem to have their own bikes now, considering the demise of the once glorious Vélib bike sharing system. Since arriving back in Paris, I’ve noticed the stations have been less-than functional, something that has been going on for months.

A change of hands from JC Decaux to Smovengo has led to numerous problems this year, rendering the Vélib nearly useless. I haven’t even bothered to sign up for it since bikes are rarely available. The city has been reimbursing subscribers. Even worse, many Velib workers have been on strike since April, so basically, just don’t plan on using it anytime soon.

There are other options, free-standing bike share program. You have to use an app to access them. They’ve popped up in other cities, including London. Systems like Gobee and oBike are stilling hanging around, but it seems like many of their bikes have just landed in the river. I saw one submerged in a fountain while jogging the other day. This is why we can’t have nice things, I thought.

For all the setbacks of the Vélib, the Parisian landscape is changing for cyclists. While studies suggest that cycling in Paris has not cut down significantly on car traffic, perhaps as it becomes easier and more culturally acceptable to commute via bicycle, Parisians will start to evolve. Perhaps not. Either way, I’m a happy little cyclist cruising across the city, sporting my helmet, ecstatic not to be crammed in the metro or waiting in traffic in some stuffy bus.

Learn more about Biking in Paris