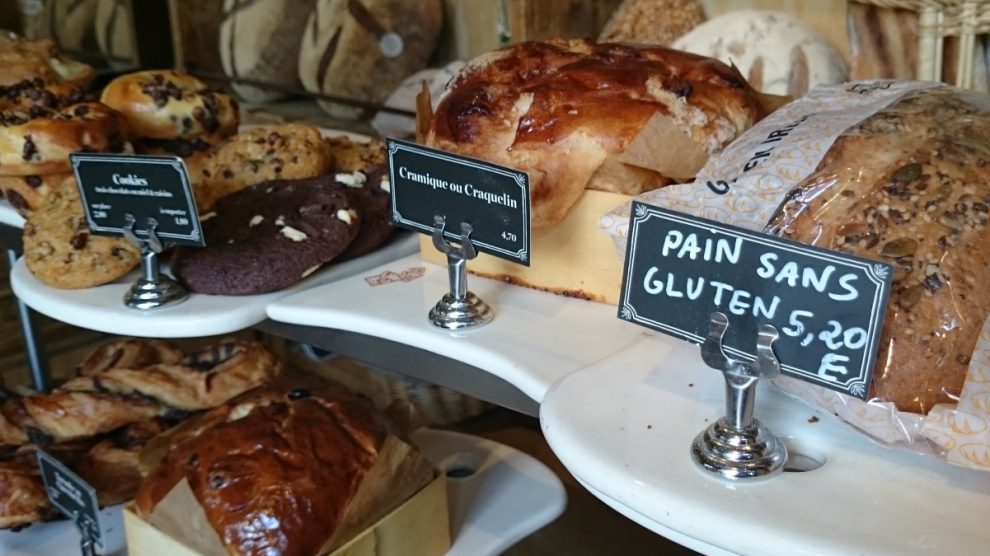 My cousins came to visit me this week in Paris for their first time, and although they were very excited to eat as much French food as possible, two of them have Celiac, a very serious condition that means they can’t have any gluten at all.

Not even a little (some people who are gluten intolerant in the US actually have no problem with French breads here in Paris, perhaps from the different baking ingredients, I don’t know).

So we tried as many different gluten-free products as we could find during their short blitz through town, without particularly going out of our way to find it. Here are our experiences:

– Canal Bio (46bis Quai de la Loire, Bassin de la Villette, 19th): we were on the Canal St-Martin and strolled up to the Bassin de la Villette (north of Stalingrad metro) looking for a shop selling beer and wine so we could picnic. This organic food shop has a few different packaged bread products (ie not bakery fresh). The bread was dry, tasteless, and hard as a rock the next morning, less than 12 hours after we opened it. Also of note, their organic brie tasted like nothing. Just flavorless goo. On the plus side, their gluten-free beer (one brand) was actually pretty good, and they sell raw chocolates by RRRAW, which are always awesome!

– NoGlu Epicerie (16 Passage des Panoramas, 2nd): we were visiting the Covered Passages after lunch and were looking forward to some gluten-free pastries from the epicerie (across the passage from the restaurant), but as we walked up at 3pm they were closing. Huh? Even in France that’s odd. I can understand the restaurant closing between lunch and dinner, but a food shop that is only open noon-3pm is pretty useless. We didn’t make an effort to go back the next day (also, I must admit, the last time I tried a muffin and cookie from there I found them dry and rather flavorless, so although I pass by regularly, I’ve never bothered going back inside).

– Carrefour’s Organic/Gluten-Free Section: We also popped into Carrefour Supermarket at the Italie 2 mall near me because it’s open until 10pm, and their gluten-free selection is as bland and uninviting as you’d expect from a huge chain supermarket (and we were rather put off by the lack of any other brands besides Carrefour’s own; industrial organic food being only a smidgen less bad than industrial food) and the obvious mold in the packaged prosciutto (which hadn’t expired yet).

– Eric Kayser Boulangerie (Bercy Village, 12th, but there are 20 locations in Paris): we popped in here before heading into Bercy Park to smell the roses, and they had a whole section for breads “Libre de Gluten”, freshly baked, individually wrapped and kept on a shelf separate from the other products. We got the Pain Gonesse Semi-Complet, and it was amazing! Really. I was amazed it was so tasty, moist, and filling. I would happily get this instead of their regular bread even though I have no problem with gluten. An earlier blog by Gluten-Free JetSet all about the Eric Kayser range mentions the breads are only half cooked, but that must have changed because it was definitely read to eat.

There are many other gluten-free places in Paris now. I have been to Chambelland and Thank You, My Deer, thought both were okay, but not worth a trip across town (they’re not exactly near anything tourists would see).

Here are a few other articles about gluten-free eating in Paris by other journalists and bloggers:

– And if you can understand French, Gluten Free in Paris is a local website updated regularly.