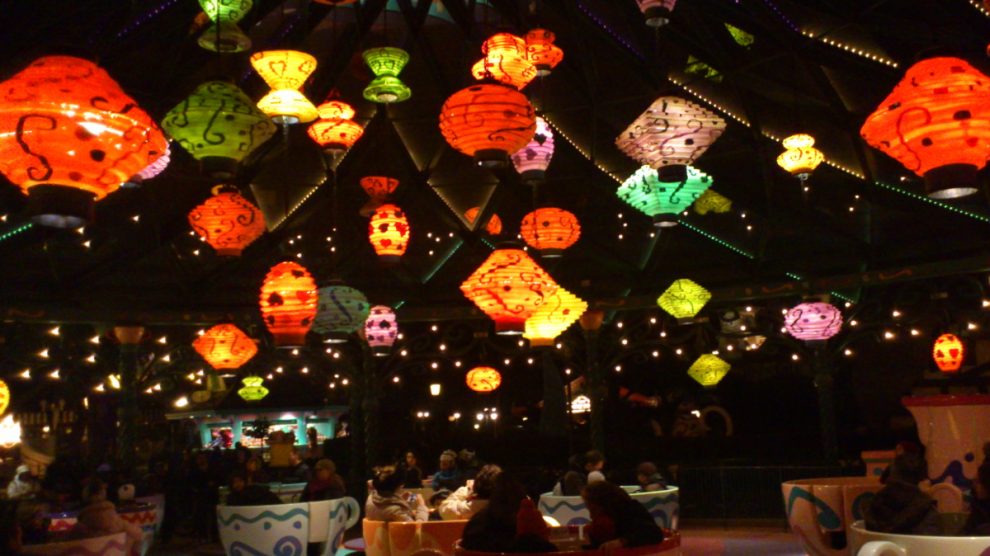 Earlier this month I told you about Halloweenland at Disneyland Paris (and I hope you’re all going to be there tomorrow night under the full moon!), and this week I’m going to tell you everything else I discovered on my reconnaissance mission.

First of all, it’s not just like Disneyland in California. Not at all, really, except Mainstreet looks exactly alike. There’s no Tiki Room. No Jungle Cruise, either. No ‘Toon Town or Matterhorn. There’s probably more things that the one in Paris doesn’t have, but it’s been three years since I’ve been to the one in Anaheim, so I can’t be sure. So why, you wonder, would anyone want to go? Well, because there are other interesting things to discover. Let’s look at it in order:

Frontierland comes first, and you’ve got the Phantom Manor and Mark Twain Riverboat, the Wild West Shooting Gallery and so forth, and the Big Thunder Mountain rollercoaster. Next is Adventureland, with an Aladdin themed entrance. You’ll find the Pirates of the Caribbean here in a stone castle instead of under New Orleans Square (there’s still the great Blue Lagoon restaurant). I heard the one in California has been made politically correct. The French don’t do politically correct, at least not yet. Adventure Island and the Swiss Family Robinson Tree House are there, as well as the Indiana Jones Temple of Doom, which goes upside down, unlike the one in California.

Fantasyland seems to have all of the favorites like the Tea Cups and It’s A Small World. Sleeping Beauty’s Castle has an underground dungeon and dragon, which I can’t recall from the one in CA. Every time I see the Sleeping Beauty Castle, though, I recall a British comedian Eddie Izzard making jokes about its size. “You’ll have to make it bigger. See, we’ve actually GOT THEM over here.” There is no Mr. Toad’s Wild Ride, but Peter Pan’s Flight does well with the kids and there’s a cool Alice in Wonderland Labyrinth to get lost in for awhile. Flying Dumbo and the Carrousel are also present and accounted for.

Finally, Discoveryland, which benefits the most from NOT looking like the original Tomorrowland in CA. It’s got more of a Jules Verne/Renaissance future look rather than the Minneapolis Airport look of the old one. And Space Mountain kicks tail! Upside down and really scary, not just pitch black with stick-on glow stars. Autopia was under construction while I was there, but the submarine Nautilus is there, the Orbitron, and the Star Tours. The Railroad still circles the entire park, too.

Other need to know things: Eurodisney or Disneyland Paris? Technically, both are correct, with the legal entity being Euro Disney, and the park itself called Disneyland Paris. The names kept overlapping and getting jumbled, so you’ll only see Euro Disney in the fine print now. If you have any souvenirs from the early years with the Euro Disney imprint, send them to me and I’ll take good care of them (no, really, please do).

Disneyland is cheaper off-season, which starts in November and ends in mid-March, with a short break during the Holidays. Kids get in free from January until March when parents stay at the Disneyland Resort. Food itself isn’t too expensive; you have a huge selection to choose from for all budgets. I personally liked the little pizzas shaped like Mickey ears.

Disney Village is just across the street next to the Disney Lake and Disney Resort hotels. There are bars, restaurants, live music and clubs that stay open all night long. There’s a huge movie theatre and an even bigger set of Golden Arches in front of McDonald’s. There’s no entrance fee, and the shops carry pretty much exactly what you’ll find inside, so you don’t have to waste valuable rollercoaster time looking for souvenirs. Speaking of which, try to find the items that are exclusive to Disneyland Paris. The CD “Une Journée à Disneyland Paris” has some reworked classics in English and French. They’ve just started pin trading, so bring along any you may want to trade and look for the signs.

The Fastpass works pretty well to keep you from standing in long lines, and doesn’t cost a thing. I only waited five minutes when I tested it on Peter Pan’s Flight, with 45-minutes being the posted time. I don’t know why everyone doesn’t use it. Another thing to ponder: how do they get Palm Trees to grown in Paris? I get it in Florida, Japan and California, but Paris is cold and wet. Maybe they replant new ones every three months. I’ll keep you posted.

Finally, just next to Disneyland Paris is the new Disney Studios, a new theme park scheduled to open in spring 2002. Again, see the website for more info on this. I like the Disneyland Paris website. It’s fun, like Disney itself, and answers all of your questions, gives you contest info and special offers. If you’d like some alternative viewpoints, check out these books in your local book shop:

– Once Upon an American Dream: The Story of Euro Disneyland by Andrew Lainsbury

– Take the Kids to Paris & Disneyland Paris by Helen Truszkoska