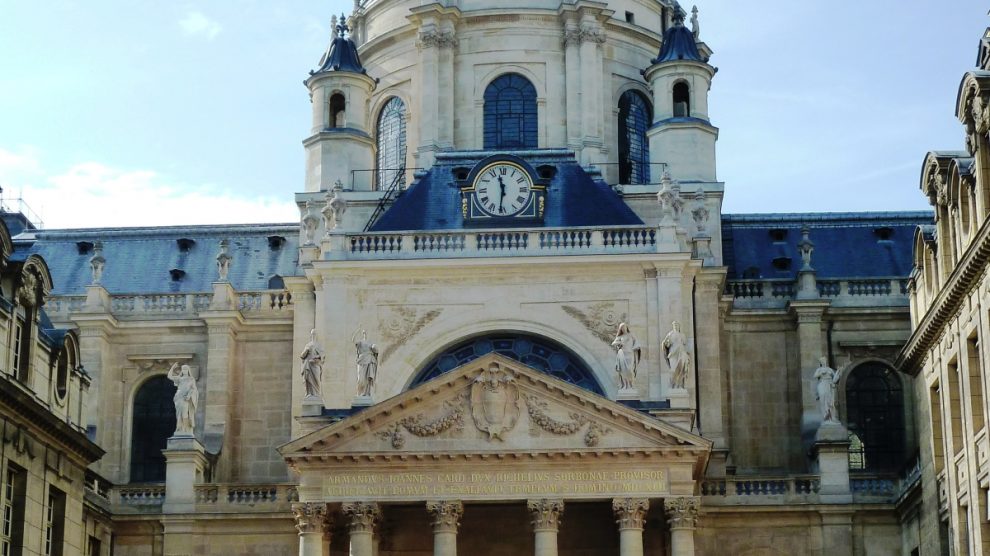 Please call me Dr. Bryan. Yes, I hold both a master’s and a doctoral degree from the Sorbonne in Paris. The Sorbonne, or more generally the University of Paris, has existed for centuries, educating the likes of Victor Hugo and Marie Curie, among others. Most people around the world, at least those in academia, know the name “Sorbonne,” which elicits the same sort of reaction as “Harvard” or “Cambridge.” I am proud of these degrees, but most importantly, I am happy about their price tag.

For five years of graduate study, I probably paid in total about 1500 euros, including registration fees and social security charges.

That’s about 1650 US dollars with the current exchange rate. And no, I didn’t forget any zeros. The University of Paris system, unlike Harvard, is basically free. This little detail, however, doesn’t seem to tarnish its reputation at all.

Within France, going to Sciences Po or ENS, the grandes écoles, basically their version of the Ivy League, will score you better networking possibilities and more respect in the business or political world. The Sorbonne is more like a giant liberal arts college where some students flourish and others attend the first class never to return again. Still, it is a solid educational system that offers students the possibility to learn and to succeed, with a bit of effort. It also allowed me to walk away from my education totally debt free and with money saved up for the next step.

So how is it so cheap?

According to government statistics in 2014, the French spend about 29.2 billion euros (31.7 billion USD) on higher education which averages to roughly 11,560 euros (12,554 USD) per student. At most universities, aside from the slightly more expensive grandes écoles, students pay a registration fee that might total 400 euros. At Paris Dauphine, a pretty good school in the capital, the academic year costs students 261 euros in cash. At a grande école like Science Po, a master’s degree costs just over 13,000 euros (14,119 USD). That’s still not that much.

We can thank the French Revolution for shaking up the education system, but it was a politician named Jules Ferry who finally pushed legislation to make it free almost a century later in 1881. To put things in perspective, Yale University awarded the first American Ph.D. degree in 1861, so it’s not surprising that the United States has some catching up to do.

Meanwhile in the US…

In the US, it’s a bit different. Our private universities command enormous fees. A master’s at Columbia costs 49,300 USD, not to mention the added costs of living in New York. A master’s at a smaller school like Rice still range from 26,000 USD to 50,000 USD. It’s no wonder then that on average, graduates in 2015 shoulder about 35,000 USD of debt as they leave their universities, including government and private loans. One study claims that seven out of every ten graduates left college with debt in 2014. I was one of those seven.

The US government does pay quite a bit, with nearly 30 billion dollars in federal Pell Grants and about a billion dollars in federal work study programs. Still, the average Pell Grant awarded in 2014 was only 3673 USD. Remember, that’s more than my entire graduate education in France. Moreover, tax subsidies for private universities are often disproportionate to funding for public universities, as described in the Washington Post last year. And then there is the issue of dwindling funding from states.

But I’m not about to launch into a critique of the US education system. At least not from within the US. What I find curious is how many students study abroad, specifically in Paris, and continue to go into debt for it. I, on the other hand, managed to come out of my degrees in the green, with savings to boot.

What a lot of students don’t realize is how profit-driven their universities are, and study abroad is a clear reflection of this. I worked for a Paris-based study abroad program where students spent a semester or a year paying full tuitions just like their counterparts in the US. What they got in return were a few in-house classes as well as “the opportunity” to attend classes at the local universities, like the Sorbonne.

I admit I studied abroad in 2006, and I appreciated the experience. Only now, however, do I realize that I was paying 20,000 USD to take classes that cost the French students just 100 euros per semester. Sure, I was getting university credits, but ultimately I was just buying my diploma. There was no reason I needed to go into debt to have those experiences when I could have done it on my own as an independent student, paying much less.

Today, the prices have only gone up. Students at NYU’s Paris campus pay 27,188 USD per semester at 16 credits in the Graduate School of Arts and Sciences. The American University in Paris costs 15,102 euros, including fees. Middlebury is around 28,000 USD for a year of study in France, plus a 1500 USD study abroad fee for in-house students. Sure, that’s less than the 47,000 dollars they charge for their Vermont campus, but it’s still a lot.

I may seem like a whiner, but I would hope that future students would take heed. There are great reasons to study abroad – to learn a new language, to engage with a new culture, to get to know a location. And some study abroad programs facilitate that nicely. But in most cases, studying with other Americans, especially in Paris, often leaves students in their little bubble. And, again, further in debt.

So why not go around the middleman and do it a bit differently? If the idea is to graduate with less debt and study in France, there is hope. Why not accelerate your undergraduate degree (I did my last year part-time to cut costs) and consider pursuing a graduate degree abroad? There are plenty of benefits that most students don’t realize.

First, by doing a master’s program, you are reducing costs wildly. Beyond the low registration fees, there are other sorts of financial assistance available. Students get affordable transport cards (the imagineR in Paris) and housing assistance (the CAF) that can cover a significant portion of rent each month. And as long as you are a legal resident, these opportunities are available. They require some patience, but hey, this is France.

Second, by entering into a master’s program at a French university, you are entering with a new crop of students. This means fewer cliques to break into, unlike undergraduate courses where foreign students are often ignored. I have made some lifelong friends in my master’s program because we all came from different places and started at the same time.

Third, you are fully immersed in the language and culture. There are no English-speaking administrators to hold your hand, and most classes are in French – though some degrees do exist in English. The other students are all speaking French, and you’ll be expected to write papers and exams in French, though most professors are kind enough to let you use a dictionary if you are a foreign student. If you want to improve your French, then throw yourself into a graduate degree and you should become fluent in no time.

Finally, you can actually make money by doing your post-graduate degrees. Between the housing assistance and other scholarships available, there are also salaried positions, like the contrat doctoral, that I nabbed during my PhD. Essentially, I was fully funded during three years. I received a full-time salary that even opened me up to unemployment benefits afterwards if I wanted. And then of course there are teaching possibilities beyond simply teaching English as a second language.

These require applications and interviews, but they are real options available to those who are willing to invest in their education. Furthermore, students can work legally alongside their studies, and it’s fairly easy to do so. Americans can work at English-speaking restaurants, perform translations if your French is good, work as tour guides, babysit, or even teach English privately. While students are capped at about 20 hours a week on a contract, they can also apply for the auto-entrepreneur status and file taxes as freelance contractors, allowing them to work as much as they want.

I learned all of this on the fly, and it wasn’t always comfortable or easy. Getting your foot in the door, acquiring visas, and keeping up with paperwork does make life more complicated. Chalk it all up to immersion living. If applying from outside of France in a non-EU country, you’ll need to go through Campus France to secure a visa, but for those already in France legally as a spouse, a teaching assistant, or even as an intern, it is possible to change your status directly at the prefecture once accepted to a school.

You’ll have to keep an eye on deadlines and required documents, though each university is different, and I’ve compiled a list of each one in Paris on my site. Here’s an example of a website that you’ll come across while researching programs. It’s not always the most clear. Prepare to get birth certificates and university transcripts translated by an official translator – an inevitable cost to get the process started.

One thing to note is that hard science, business, and law degrees are not always easily accessible to foreigners. Shoot for topics like history, communication, art, literature, and sociology instead, as they tend to be less competitive.

If you want flowers and macarons all the time, higher education isn’t necessarily going to fulfill your postcard Parisian dreams. It’s not an easy solution to living in France. But if you want to earn a degree and are even remotely serious about your education, it’s a solid choice.

By living in Paris as a student, I was able not only to pay off my undergraduate student debt within 6 years, but I managed to live comfortably and still save some money while working on the side.

That means I can afford a bottle of Champagne to celebrate because, you know, I earned a PhD while living in one of the most amazing cities in the world. No biggie.