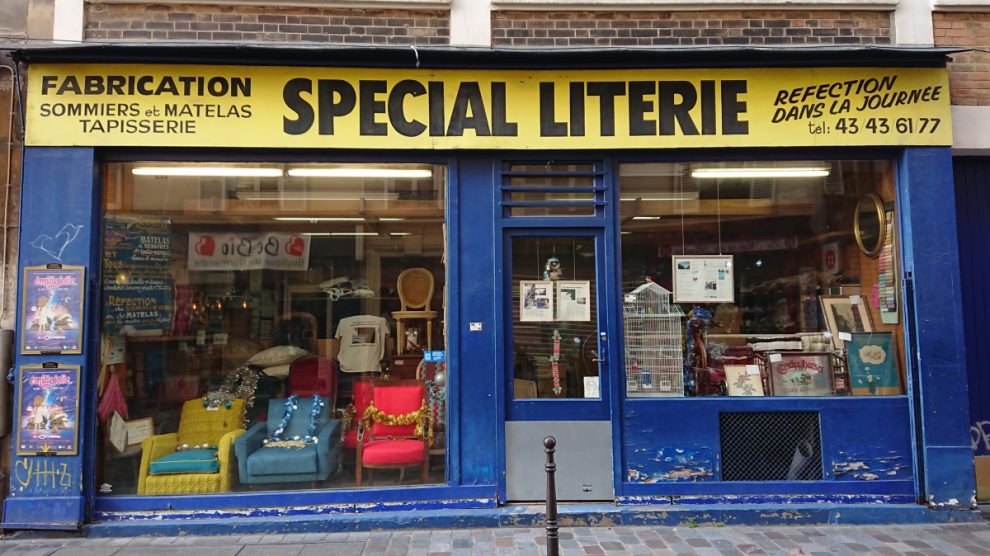 I’ve been on a long quest to find a new mattress in Paris, and got a bit obsessed about all-natural mattresses after spending the night on the Coco-mat bed at the Hidden Hotel. It was surprisingly hard to find one that was affordable and made in France.

Of course, these fabulous mattresses cost a few thousand euros, so looking for something more affordable (ie, under €1000), I scoured the web. But I found nothing in Paris, nor in that price range. I considered natural latex (available at La Redoute), and drooled over the fancy, all-organic combinations of the two sold at Matelas sur Mesure. I was hoping an natural mattress would cut down on my allergies, help regulate the cold and heat throughout the year, and last longer than the sorry-excuse-for-a-mattress that the owners of my flat got for me when I moved in five years ago. I also thought it would be nice to sleep on something non-toxic, made locally.

A Handmade Mattress Maker in Paris

Completely by chance, last week when I was sitting at a café in the Marché d’Aligre with tour clients (showing them how to be locals, of course), I noticed a shop across the street that I had walked past countless times, Les Laines du Nord: Special Literie (19bis rue de Cotte, 12th, tel 01 43 43 61 77). I popped in and asked the price, and the same mattress was just €680 (the rent is probably cheaper in the 12th) delivery up to my 7th floor flat included. And the owner said he was around for at least the next few days. He even took me downstairs to show me the machine that fluffs the wool, the rack where the fabric is stretched and stuffed, and the special table with a sewing machine that goes around the edges. Pretty low-tech, I love it! So I put in my order for an extra-firm wool mattress in a classic slate-striped cotton ticking (you can also choose damask patterns in pastel colors), and it was ready two days later.

They told me to come back in 10 years to have the mattress redone: they pick it up in the morning, take out the wool stuffing, clean and refluff it, put a new cover on it, and then deliver it back to you before bedtime. So instead of hauling the old one away to the dump (like the one they hauled out of my flat this morning), you reuse and recycle. Not a bad deal.

Of course, there’s no website to visit; these are artisans, not bloggers. 😉 But you can have a peek at the process here.

This article was originally written in February 2010 when I first purchased my mattress. In December 2018 I moved from my 7th floor apartment to a 1st floor apartment a few blocks away. Since it was time to freshen up the mattress anyway (and especially since it was sprayed full of chemicals during the bedbug episode of 2014), I thought I’d stop by “my” mattress shop (as I began to think of it) and arranged for them to pick it up at my old place, replace the stuffing, and deliver it that night at my new place. Not only did it cost half the price of the original mattress, it saved me the hassle of moving it, and they didn’t have to haul it up seven flights of narrow stairs. Win-Win! 😀

My partner is the one who noticed my face in the window: “Hey, it’s your article!” And there it was, printed out and framed, the original article I wrote in 2010. They said they’d had many orders from English-speaking people thanks to my post, and even shipped a few overseas. I hope everyone is as happy as I’ve been with their hand-stuffed mattresses!