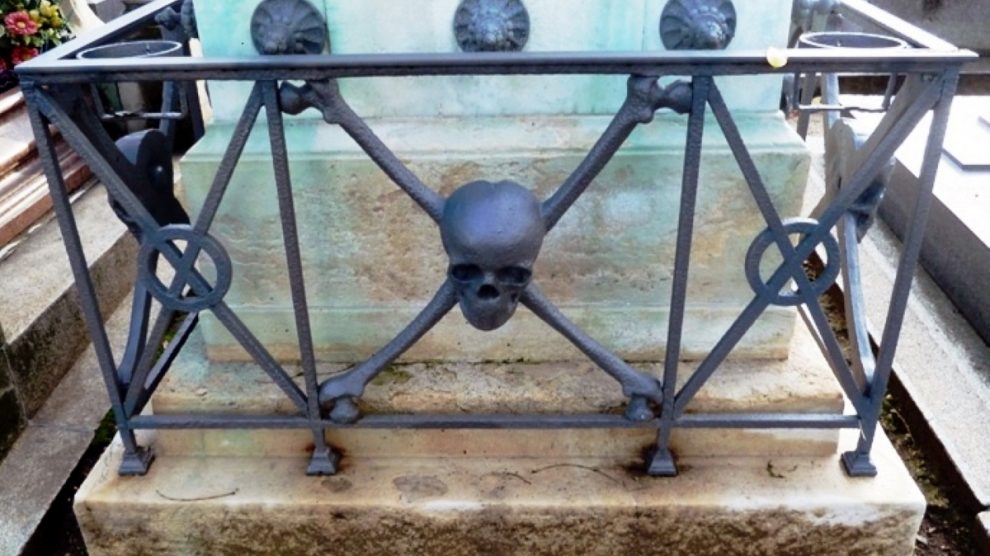 Cemeteries get a lot of cinematic attention on Halloween, but in France they don’t really consider that American import anything more than a commercial holiday for stores to sell candy to kids. The real holiday is actually Toussaint, or All Saints’ Day, on November 1st. On this bank holiday families traditionally visit the cemeteries to pay their respects and place flowers on the graves of their loved ones.

I’ve always had a bit of a morbid curiosity about cemeteries, particularly the Parisian ones. Growing up in Arizona I rarely ever saw actual tombstones (except in Tombstone, AZ, of course), just the flat marble plaques embedded in immense lawns that were easily maintained — like the many golf courses — by groundskeepers on riding mowers. Actual tombstones were reserved for the creepy graveyards I saw in horror films and Halloween haunted houses. And those were just made of painted foam.

So I was quite fascinated by the cemeteries of Paris. They didn’t seem real to me with their crumbling sarcophaguses (aka sarcophagi…they’re both correct), dramatic statues, and authentic stone and marble tombs. It was hard, at first, to believe the often heart-sick inscriptions were made by real mourners and not set decorators.

Like most of the tourists who come to visit Parisian cemeteries, I wanted to see the graves of the famous people I had heard of, such as Chopin, Edith Piaf, Jean-Paul Sartre, Colette, Oscar Wilde, Abelard & Héloïse…and yes, Jim Morrison. I took photos of the graves that were particularly picturesque, either very fancy or practically decomposed by the encroaching moss, weeds and tree roots. I took photos of melodramatic statues, of winding cobblestoned lanes, of the cats sometimes seen darting among the tombs.

When I began giving tours of Paris in 2004, it was inevitable I’d get requests to visit the largest — and most famous — Parisian cemetery, Père Lachaise. And I would give them the guidebook description.

There are 14 cemeteries within the current Paris city limits. During the late 18th century, just before the French Revolution, eleven of the city’s overcrowded cemeteries, such as Les Innocents next to Les Halles (now home to a fountain popular with skaters), were closed. The bones of over six million deceased Parisians were transferred to what are now known as the Catacombes. Soon after, in 1804, Napoléon opened the new Père-Lachaise Cemetery, named for Louis XIV’s confessor who once owned the land in what was once a distant suburb of Paris.  It was so distant, in fact, that the graves of several famous French men and women were moved there to make it more popular with the bourgeois Parisians. This is why you’ll see some tombs that are actually older than the cemetery itself.

Montparnasse and Montmartre soon followed, in 1824 and 1825. In 1860, all three cemeteries became “intra-muros” when the suburbs were annexed to the city of Paris. There are eleven smaller annex cemeteries within the city limits, and six more in the immediate suburbs, with a total of 20 cemeteries under the management of Service des Cimetières de la Ville de Paris.

These cemeteries have a total of 422 hectares (1042 acres), of which 73 hecatres (180 acres) are designated “green spaces” which are home to a large variety of flora and fauna. Each cemetery has its own particular style: Cimetière Pantin, with its tree-lined alleys, is the largest in Europe; the Cimetière Thiais, with its 1930s architecture, overlooks a French garden with fruit trees; Cimetière Bagneux is considered the most verdant, with a diverse bird population. Apparently there are even squirrels out there, which you won’t find in any intra-muros cemeteries.

Of course the three oldest — Père-Lachaise, Montparnasse and Montmartre — are known for their elaborate sarcophaguses and funerary statues, many built during the 19th century. Eight municipal conservationists work to preserve and restore the tombs which have historic, cultural, architectural or artistic importance. Père-Lachaise also continues to serve as a place of remembrance for those who have no burial, with memorials to victims of the Nazi concentration camps, to those who have died in commercial plane crashes, to those who died fighting for France overseas, and a wall (the Mur des Fédérés) dedicated to those who died fighting in the cemetery during one of the final battles of the Paris Commune of 1871.

Both Parisians and tourists like to visit the cemeteries because of this rich artistic and historic heritage, but also because the cemeteries themselves are peaceful refuges from the noisy, crowded city. And Goth kids hang out there because they have the right costumes. But these cemeteries are not museums, nor parks. These are still working cemeteries. Which brings up a whole different set of questions from visitors, the answers which you won’t normally find in your average Paris guidebook.

Who can be buried in a Parisian cemetery?

How do you buy a plot in a Parisian cemetery?

Only those who live or have lived in Paris, or have family already buried in a Parisian cemetery can purchase a plot. Only the city is authorized to sell plots; they cannot be bought and sold between individuals like property because they are considered “hors commerce“. Within Paris, you can buy a single burial plot (a casket is buried directly in the ground) or a vault destined to receive several family members depending on its size. You can purchase your plot in Paris for 10, 30, or 50 years with the option to renew, or “en perpétuité” (forever). The old family sarcophagi you see in the three historic Parisian cemeteries have survived for so long because they were purchased in perpetuity and — an important point — the descendents are still maintaining them.

But what happens when the temporary plots expire, or the tombs start to fall apart?

If the plot expires with no renewal (there is a long grace period if the plot is “occupied”), then the plot is sold to someone else. If there’s a body, it’s moved into the ossuary (mass grave) or cremated. Contrary to what many believe, the city is not responsible for maintaining the plots themselves. This is the responsibility of the families who own them or their designated heirs who are required to clean the graves of moss, dead leaves and shriveled floral bouquets at least once per year. They’re also responsible for any structural issues, such as cracks or, in the case of more elaborate tombs, broken doors or windows. In the case of Jim Morrison’s heirs, they have to pay to clean up all of the graffiti that “fans” leave behind on both Jim’s grave and all of the neighboring graves.

What if my grandkids get tired of wiping the pigeon poop off my grave after I’m dead?

If no willing heir can be found to maintain the plot, it will eventually be taken back by the city. If it’s a historic monument or chapel, it won’t be destroyed, but any new family who wants to purchase that particular plot will then be responsible for the restoration and maintenance of the tomb. With only 634,000 burial plots available within the 20 municipal cemeteries, this “recycling” is necessary in order to ensure there are always enough places available for the recently departed. There are specific limits to how many coffins can be placed in a tomb, depending on the size of the plot, but there are no limits to urns. Remains from older coffins can also be “grouped” together to create more space.

So how much does it cost?

Are there other options?

Those who opt for cremation at Père Lachaise Crematorium can have their remains scattered on a designated lawn, placed in an urn in a private tomb or the public columbarium, or taken “home” by the legal heirs. People in movies are always dumping ashes off the Eiffel Tower or the bridges of Paris, but I don’t think this is actually allowed…and even if it was, I don’t think the tourists standing in line below or cruising along on the Bateaux Mouches would really appreciate the unexpected dusting.

If you would like to visit the cemeteries of Paris, they are open March 16-November 5 from 8am-6pm, and November 6-March 15 from 8am-5:30pm. Gates open at 8:30am on Saturdays, and at 9am on Sundays or holidays like Toussaint. The Cimetière du Calvaire (just outside the Eglise St Pierre de Montmartre) is only open to the public on November 1st, from 8am-6pm.