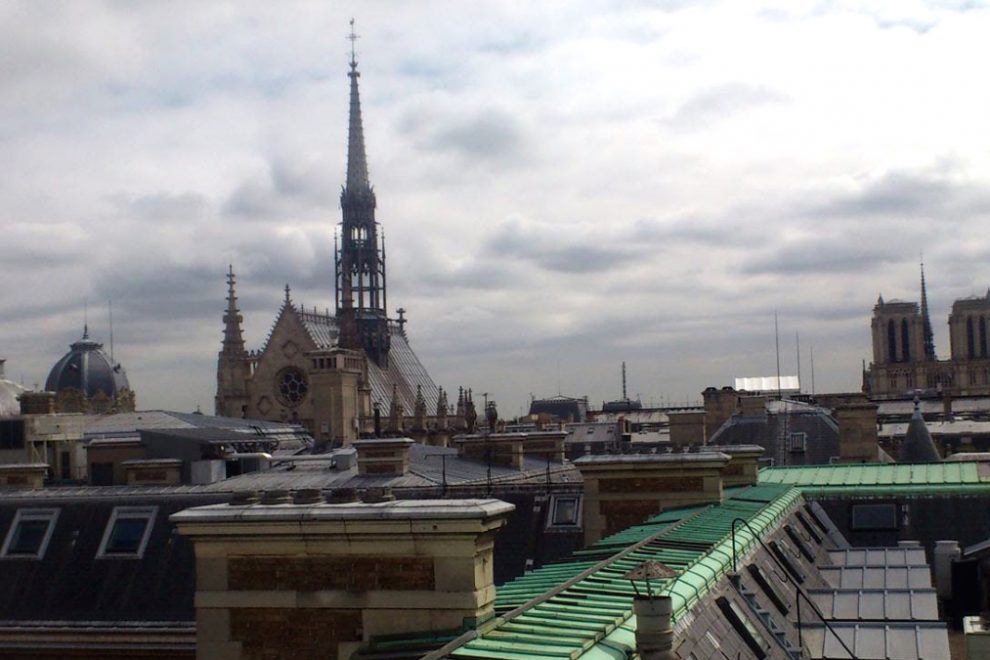 It seems I will never make it as a hack meteorologist. The Indian Summer I had been looking forward to never happened, it just got icy cold in October! So far November is mild, if gray, much like last winter. Let’s hope it holds for the transportation strikes next week (predicted to start November 13 and possibly last through the 20th). This isn’t a huge surprise since resistance to Sarkozy’s plans to cut down on the overly-generous retirement packages for civil workers (ie public transport) have gotten the unions riled up. And, well, it’s the season. There are always strikes in the fall. Nothing else to do? Maybe. Or perhaps it’s just that no one feels like going back to work after a 5-week summer break. I wouldn’t know. 😉

You can pretty much go to any wine bar in Paris for Beaujolais Nouveau, but here are a few suggestions of tried and true establishments:

If you speak French and are looking for volunteer opportunities in Paris , check out the website for Nouvelle Acropole Voluntariat ( www.volontariat-paris.org ), an organization that works on many fronts, including local first-aid and assistance for the homeless, environmental actions, natural disaster relief and international humanitarian crisis assistance. Check out their calendar under “Tout les Activités” for info the next available opportunities to help out, including monthly training days.

* For All Americans Living Overseas *

Pardon me while I get up on my soapbox, but with one year to go to elections, it’s a good time to start thinking of the rights AND responsibilities that come with that American passport. Even if you don’t care about what’s happening “back home”, you should be concerned about laws that effect you as an American living overseas, including taxation, retirement and healthcare benefits, dual citizenship and voting. AARO (the Association of Americans Residing Overseas) is a NON-PARTISAN organization that not only lobbies for these issues, but also serves as an important forum for information and debate here in Paris . They hold regular tax workshops, political debates and talks with visiting representatives from Washington DC . And they’re a nice bunch of people (yes, I’m a member too). Just becoming a member helps support the activities and lobbying efforts of AARO. Have a spin around their site and consider joining yourself. www.aaro.org

This is always a tough night in Paris for tourists, especially if the weather is crappy. Most Parisians have dinner at home or at a friend’s and then go to a private party. But few tourists have this option. So do you pay an exorbitant fee for the “Réveillon Menu” in a Parisian restaurant (sometimes accompanied by entertainment, but not always), or do you pack up a picnic with some Champagne and camp out on the Pont des Arts to watch the fireworks (if there are any) and hug all of the passers-by at midnight (probably the only time the Parisians will be so touchy-feely with strangers)? I would recommend eating early somewhere that isn’t having a “special” menu, then go to a show and finish up on the Champs-Elysées with the masses (unoriginal, but fun nonetheless). Check out my blog entry for some ideas, and book quick for any concerts/events! I watched all of the places for the Opéra Garnier disappear within two days. www.secretsofparis.com/New-years-eve/

Want to shake your booty in Paris ? There are venues for all different styles of dancing, and usually beginners can come early for free lessons. The dancing on the banks of the Seine is now over until May, but there are plenty of indoor venues as well open all year. Here are a few links to help you get started:

** PS: Did you know that there’s a name in France for those slow dances to sappy songs that bring back memories of Senior Prom? It’s called “Le Quart d’Heure Américain”, and women get to choose their dance partners. Happily, there are few places in Paris where you can find this kind of dancing anymore!

The Rue St-Anne in the 1st (between Opéra and Palais Royal) is the best place to find Japanese cooking in Paris . One of my fave’s is Naniwa-Ya (11 rue St-Anne, 1st, tel 01 40 20 43 10), a great noodle restaurant, casual and packed, where the servers barely speak French. Loved the tofu steak and the sobu noodles (I got the Curry noodles, which were delicious). A Japanese travel writer living in Paris told me her favorite places are Korim (58bis rue St-Anne), Ajiatei (47 rue de la Montagne-Ste-Geneviève, 5th), Kirakutei (38 rue Pernety, 14th), and, if you have the budget, Isami (4 quai Orléans, Ile-St-Louis).

There are new “ethical” boutiques opening every week in Paris, but the easiest way to find the nearest health food shop
, organic restaurant, ethical clothing boutique, bike rental, cooperative associations and businesses, check out Le Marché Cityoen (a sort of ethical yellow pages, France-wide): www.lemarchecitoyen.net One site I found here that’s quite useful is Domiance (www.domiance.fr), an employee-owned cooperative of temporary domestic help (Need a cleaner for a day? Dog walker? Baby sitter? Help with your computer? Someone to help you prepare for a party or pick up your package at La Poste?). In French.

There’s an interesting new luxury shopping site (home, travel, beauty, high tech, men’s, women’s and children’s clothes and accessories) www.firstluxe.com, which is different in that you don’t buy anything from them, but directly through their link with the stores themselves, so you can reserve that Chopard necklace or those Ferragamo heels before even showing up at the boutiques. Convenient, eh? In French.

This museum is one of my favorite in Paris , yet it’s rarely on the average tourist’s radar. Unlike some of the tiny, dusty little museums around Paris , this is a huge, contemporary museum in a wonderfully-restored historic building and chapel. The wooden floors and vaulted wood ceilings make an excellent setting for the permanent collection of scientific instruments (from before 1750 to today), construction exhibits (the art of building from the middle ages through the “structural revolution” of the 20th century), communications history (my first computer is in here!), mechanics displays, and the evolution of transportation with original flying machines, old city buses, and even bicycle prototypes. There are touch screens with lots of extra information for each exhibit, particularly targeted for children. Basic texts are in English and French, and there’s even a café-bar on site. Rarely ever crowded, and it’s guaranteed you’ll learn something interesting in the three floors of exhibits! 60, rue Réaumur, 3rd www.arts-et-metiers.net Entrance €6.50. Closed Mondays.

So it’s time for my annual update of the hotels for the Fodor’s Paris Guide. Usually I look forward to visiting the newly-opened hotels, always something interesting to see. But this year I’ve already become a bit jaded. Too many “design” hotels, not enough decent budget hotels. In one case, one excellent budget hotel that closed a year ago for renovations (the Hotel Kleber, near the Arc de Triomphe), is now just another expensive designer hotel (well, over €250/night). I visited the Hotel Lumen (www.hotel-lumenparis.com), brand new, located right next to the Eglise St-Roch on the Rue des Pyramides (1st). It’s an excellent location, and the design is very different, quite impressive actually. You can tell they put a lot of effort into it. But…well, for €350 (the low-season rate for a small double) you should have a little space! I’ve seen the size of the suitcases people bring when they come from North America for the week, and there’s just no room in these rooms. Sure, the suites have space, but for €800 you could stay at a palace hotel. A great design hotel for weekend travelers from Europe , perhaps.

Perhaps somewhere in between is the newest youth hostel (not that you have to be young to stay there), right across the street from me, called Oops! (50 avenue des Gobelins, 13th). It’s a “design” youth hostel, and one of the most expensive in Paris at about €30/night per person. There’s no curfew, but there is lockout from 11am-4pm. For these prices you might as well get a cheap hotel room if there are two of you. Right around the corner is the excellent Résidence des Gobelins (www.hotelgobelins.com), where you can sleep two for €73. With the dollar at an all-time low against the Euro, something’s gotta give…

*Speaking of … Paris in Cinema *

I finally got to see the Paris ending to the Diane Keaton/Keanu Reeves/Jack Nicholson film (I was on a plane when the landing cut off the ending the first time I saw it). I’ve had so many people ask me about the hotel (Plaza Athénée) restaurant (it’s Le Grand Colbert, just to the north of the Palais Royal Gardens) and the bridge in the final scene (the Pont d’Arcole, between the Hôtel de Ville and Ile de la Cité). Such a great film! And for real Paris geeks, you’ll notice that when Harry walks out of the hotel the Eiffel Tower is behind him to the left, when in reality the Eiffel Tower would be to his right on walking out (but I guess that didn’t work with the shot, LOL).

Another recent Paris film I saw recently was “Rush Hour III”. I’m not a huge Jackie Chan fan, but I saw the preview and thought that after an exhausting week it would be good to laugh a bit. So I dragged along seven friends (including two French ones) who also needed a laugh, and laugh we did. Especially when the car chase scene crosses several neighborhoods in one block (there are no quaint little cobble-stoned streets off the Champs-Elysées, ahem). Funnily enough, this is also filmed in the Hotel Plaza Athénée. The hotel has two new gimmicks which are quite interesting: digital touch screen menus in the bar so you can see the drink you want to order, and red Plaza Athénée bicycles (with matching helmet and panniers) for clients to ride around Paris in style. What ever will they think of next?