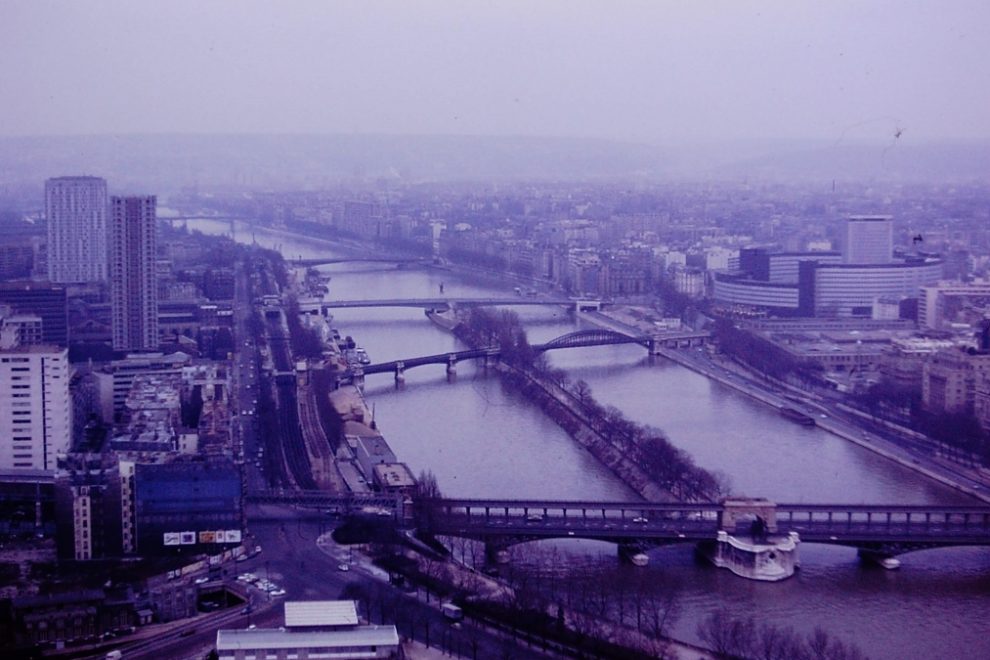 The Holiday Season has arrived in Paris
Wiki Cell: The Food of the Future
Radios for the Homeless
A Man with a Van in Paris
An Alternative to Taxis
Join an Apocalypse Flash Mob
Angels of Paris
American Library in Paris Book Award
Quick & Easy Train Tickets
New Services at La Poste
French Shopping Sites
Winter Tours and Itineraries

The Holiday Season has arrived in Paris Christmas markets, colorful lights on all of the shopping streets, flocked pine trees, magical window displays at the department stores, the giant Ferris wheel at the Place de la Concorde, open-air ice skating rinks, and even the chilly weather to go with it! I went to the large Village de Noël on the Champs Elysées last week to enjoy some vin chaud with a friend, and I was happily surprised at how much the quality and variety have improved since last year. There are more artisans and fewer junky electronics and Santa hats, better food options (with some oddly kitch Americana going on), rubber sidewalks so you’re not walking in the mud, little heaters to warm your hands, and an awesome new skating track that takes you through an amusing tour of the wildlife of the Seven Continents…like It’s a Small World except there’s a live DJ and disco lights at night. It’s a great place to pick up holiday gifts (I got some fabulous holiday cards with cut-out pop-ups of Parisian monuments) while stuffing yourself on French foods (I always go for the sausages) and barbe à papa. Find the details of this market and the other holiday events around town at the Secrets of Paris Calendar.

Wiki Cell: The Food of the Future

Last month was SIAL, one of the biggest international trade shows for processed foods. It doesn’t sound very sexy, but almost everything Westerners eat today is processed in some way, so it’s a huge deal in the food industry. Some of my tour clients (who worked for a giant American food conglomeration) had been there, and couldn’t stop talking about the latest innovation that was getting all of the buzz: WikiCell. It’s a sort of edible packaging, like the skin of a grape, that can be used for everything from yogurts and ice cream to cocktails and a shot of espresso. They told me to check out the company’s WikiBar, still in Beta phase at The Lab Store (where you can buy other futuristic products), near the Louvre (4 rue du Bouloi, 1st). So I signed up to attend one of their product testing tastings, and got to try this Wiki Food for myself. Verdict? I like the idea of popping a cocktail ball or ice cream ball in my mouth without needing utensils (would be handy for in-flight dining). It’s like Jetsons’ food, and actually tastes good (this is France, after all, even if the founders are American). If you’d like to participate in WikiCell tasting sessions, please email hello@labstoreparis.com (they all speak English and French).

Radios for the Homeless
This holiday season let’s try and spread a bit of kindness and joy to those living on the streets with the gift of music and information. Secrets of Paris is supporting Les Enfants du Canal’s “Operation 1000 Radios” to distribute 1000 dynamo-powered radios to the homeless of Paris for Christmas. Each radio costs €15. Read more about the important work of Les Enfants du Canal on our blog and consider making a quick and easy PayPal donation.

Another way for those of you living in France to help those in need is to order your custom holiday cards from Ooprint.fr, who are donating 10% of all sales to the Croix Rouge.

A Man with a Van in Paris
Need someone to help you move? Ever try and carry a futon through the metro? Can’t drive a rental van because you don’t have a license (or know how to operate a manual transmission)? Or, like my assistant Tara, did you just buy a bulky piece of furniture from someone and get in a fight with the taxi driver who refuses to load it on the roof? At one time or another we could all use a friend with a van. Last week I hired Lucas from www.manwithavanparis.com to help me move a heavy load of boxes into storage. He not only responded on the same day to my email, he was free the next day and only charges €50 per hour (hors taxe) for small jobs with only one mover (a bit more for big moves). He was on time and speaks perfect English (he has mostly American clients and has been to Dallas, of all places). Highly recommended! Lucas Tchwanto, tel 06 51 45 04 79.

An Alternative to Taxis
If you live in Paris or visit often, you’ve probably experienced the agony of waiting for a taxi that never arrives, or that arrives full of smoke with a grumpy driver who obviously took a coffee break with the meter running. Now there are alternatives to taxis, private cars which you hire, pay for, and even follow via GPS, all on your smart phone. One is SnapCar and the other is Chauffeur Privé, both which offer services slightly more expensive (well, not always!) than a taxi but not as expensive as a regular private car and driver. They have €15 minimums (and they give you the estimated price before you start), so not so economical for short trips across town, but at night, on weekends, and when you absolutely have to get to the airport on time, give them a try.

Join an Apocalypse Flash Mob
You know when you see those YouTube videos of really cool flash mob dances that go viral? (My favorite was the Michael Jackson tribute at Trocadéro) Well if you live in Paris and feel like you’ve got the moves, you can join the Apocalypse Flash Mob dance group Swing Oddity performing “La Fin du Monde” which will take place December 19th at the inauguration of the newly re-opened Cité des Sciences et de l’Industrie (30, avenue Corentin-Cariou, 19th, M° Porte de la Villette). There are practice videos to follow as well as actual rehearsals on December 9, 12 and 16. For more info check out the FB page.

Those of us who love Paris can never have too many books about the city, and Rosemary Flannery’s labor of love, Angels of Paris (The Little Bookroom, 2012) is a gorgeous little “Architectural Tour through the History of Paris” via the statues, frescos, and bas reliefs of angels overlooking every corner of the city. Each angel is photographed with the address of where you can go see it (so you can do a little self-walking tour), and includes her painstaking research into not just the angels themselves, but the historical and architectural context of where they appear, whether it’s government buildings, museums, gardens, residential buildings, or memorials. Rosemary is in Mary Duncan’s Paris Writers Group with me, so we have witnessed all of the hard work that has gone into this book over the past few years, and wish it all the success it deserves!

American Library in Paris Book Award
Speaking of books about Paris, now there’s a way to cut through the pile of new ones that appear on the shelf each year (and inspiration to finish your own): the American Library in Paris has announced a new Paris Book Award “given to the best book of the year in English about France or the French-American encounter.” The winner gets €5000, plus flight and accommodation in Paris (assuming the author doesn’t live here) for the award ceremony in October 2013. Nominations are open through June 1st, 2013 for books (print only, it is a library after all) published between July 2012 and June 2013. The short list will be announced in September. Plenty of time to sharpen your pens and get writing!

Quick & Easy Train Tickets
The SNCF has made a nice effort in improving their services, but sometimes you just need a quick train ticket, no hotel options, no rental car, no ads, no extra options. The quickest way to do this is through Capitaine Train, a travel agency that has created a super-simple site for buying train tickets without adding anything to the official price (they get a commission from SNCF). Wouldn’t it be nice if ALL service sites were this simple!?

New Services at La Poste
I feel like I’m at the post office every day doing one thing or another, even though much can be done on their website. And now La Poste has added a bunch of innovative new services to their repertoire:

– For your holiday mailings, there are now PostExport Surprise giant padded envelopes for small gifts up to 750 grams for a flat fee of €12.50 worldwide (optional fee for tracking); Lettre Max Festive are small cardboard mailers for small packages in two sizes up to 2 kilos for under €20, tracking included worldwide; and Colissimo boxes decorated by school children for the holidays to send your larger packages overseas starting at €11.70. Check the website for all of the sizes and prices.

– Timbre en Ligne: You can now pay for your stamps online and print them directly on your envelopes or mailing labels at home.

– Lettre en Ligne: I love this. You can now email a letter to La Poste until 7pm and it will be printed, put in a envelope and mailed no later than the next day, from €0.99 (depending on the number of pages and where you mail it). It could be faster and cheaper than sending a document by Fedex!

– Garde de Courrier: For €19 La Poste will hold your mail for up to two months while you’re on vacation. No need to ask the dog walker to empty your post box each day.

Lettre Recommandée en Ligne: You can upload and pay for any letter to be sent recommandée right from their website.

– Digiposte is a free, high-security storage cloud for users to store up to 3Go of documents that are then accessible throughout the world if needed (great for saving scans of personal documents and ID cards).

– You can also get holiday themed stamps, holiday cards benefitting UNICEF and kids can mail their letters to Santa at “Père-Noël – POLE NORD” by December 20 to get a reply (be sure to include your return address!) See their Holiday Offers site here.

French Shopping Sites
Looking for unique holiday gifts “Made in France”? Here are a few that caught my eye this month:

– LaPaDD.com sells everyday objects redone with a creative twist. I like the naughty wrapping paper and the reflective, winged trouser clips for cyclists.

– ReineMere.com is “chic et écologique”, with a fun selection of kitchen supplies and environmentally responsible décor objects. I like the Cuillère à Coin.

– L’Exception.com is a sort of indie French designer clothing concept store on line, with a few exclusive designers and many unique, if pricey, outfits and accessories for men and women.

Winter Tours and Itineraries with Secrets of Paris
If you’re coming to Paris between now and March 31st, have a peek at our selection of private winter tours. We have a good selection of historic walks, neighborhood walks, flea market tours, orientation tours and special themed tours in addition to the museum tours and custom itineraries. Note that, because it’s darned chilly and often wet in winter, that all outdoor walking tours over two hours are only done with a driver to keep everyone cozy and warm.