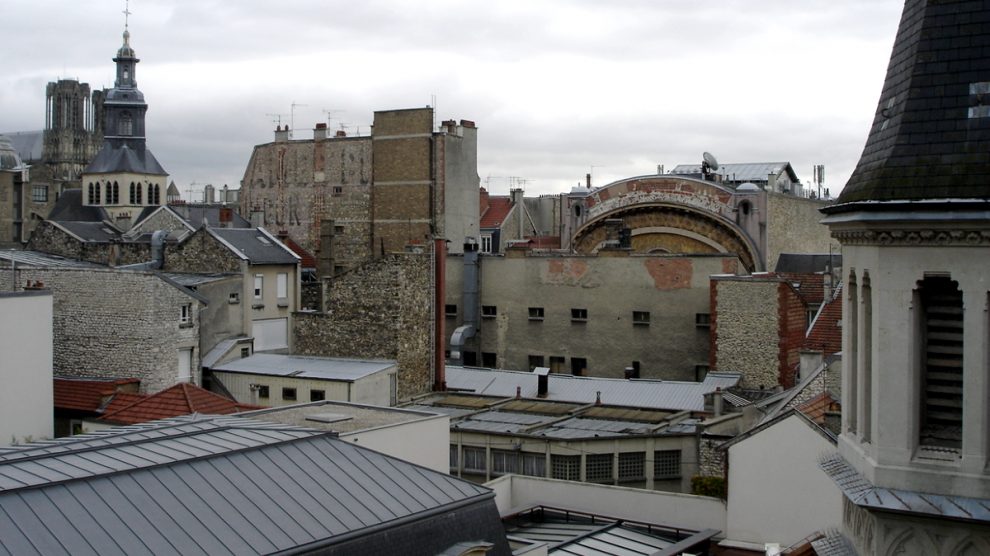 Earlier this month I spent two days in Reims updating part of the Fodor’s France Guide. But being a guide to the whole country, you can imagine how small the chapter for Reims must be! There’s never enough space to include everything interesting and worth seeing. Luckily here I can share it all with you in this photo essay.

Reims is only 45 minutes from Paris by TGV, has a nice selection of hotels across the price range, and is currently constructing a tramway to make it even easier to get around town. There are more than enough good restaurants, pastry and chocolate shops, wine boutiques, and locally-made specialties to keep all of the foodies happy. Of course there is the famous cathedral where the kings of France were crowned, as well as noteworthy museums, and many sites commemorating World War I and World War II.

And yes, there are Champagne houses galore! Big ones, small ones, pretty ones…best to bring a designated driver with you!

One of the well-know Champagne houses in Reims, the Pommery “château” is so cute it looks like a Disney set.

So many of the famous Champagne houses were run (and run well, I might add) by widows. Makes one wonder if there was something sinister going on amongst the wives at the afternoon tea parties. 😉

My Paris apartment could probably fit inside this wine barrel (set up for an exposition in the Pommery Domaine).

Like many buildings that date back to the Second World War (not forgetting that much of Reims was flattened in WWI), the City Hall is still pock-marked with bullet holes. “Trou de balle,” I say, and my French guide giggles. Seriously.

A Gothic house once home to the Counts of Champagne, now owned by Taittinger and used for private functions.

The Hôtel Le Vergeur is in the center of what was once the Medieval market. It was restored after the bombings in WWII and is now a museum of local history. It also happens to have two complete series of Albrecht Dührer engravings from the Apocalypse and Grande Passion.

One of the garden structures, used as a repository for sculptures and architectural details. Marie-Antoinette and Louis XVI stayed here before getting married.

Just outside the Vergeur Museum are the remains of the Roman Forum found during excavations. There are several Roman monuments still standing in Reims, a miracle considering 80% of the city was destroyed in WWI.

Much of Reims was rebuilt with American money, including the Carnegie Library. The American flag emblem can be seen on the left.

Most of the major sites in Reims can be seen on foot, all within easy walking distance of each other.

A covered shopping passage. They’ve got nothing on Paris, but it’s not that bad for les provinces. 😉

General Dwight D. Eisenhower’s headquarters, also known as the Little Red School House in Reims, is now home to the Musée de la Reddition, or Surrender Museum. This is where, on Monday May 7, 1945, the Germans surrendered unconditionally to the Allied Forces. It’s still a high school (the entrance on the far end), and it’s actually not “little” at all.

The words above the door to the entrance for the museum say “It’s here that on May 7, 1945, the agreement was signed that ended the Second World War in Europe.”

The map room where the surrender was signed is exactly the way it was on May 7 1945, with name plaques added to the seats (a photo shows where each of the participants sat).

The museum includes a lot of memorabilia from the end of the war, and press clippings from around the world.

Strangely enough, one of the news clippings from a British newspaper on May 8, 1945 not only mentions the end of the war, but also has — on the front page — new uses for dried eggs. I guess you have to sell newspapers any way you can, even back then!

The architecture throughout Reims is a strange mix of old and new. At least it’s not boring.

Most people think of Champagne when they think of Reims, but the destruction and massive casualties suffered in this region during both World Wars has left its mark. Here is just one of the many monuments to the soldiers found throughout the city of Reims.

This tiny poissonnerie, also across from Les Halles Boulingrin at 27 rue de Mars, has an even smaller fish restaurant hidden in the back.

It’s the little details like the fish cookie with my coffee (don’t worry, it’s a sugar cookie, no fishy flavor) and the friendly welcome that make this restaurant so enjoyable. And don’t miss the warm oysters!

Across from Les Halles Boulingrin, the old marketplace, is this contemporary wine bar.

Platters of charcuterie and cheese accompany local and regional wines. There are also more hearty plats du jour, but je ne peux plus.

Just next to the Cathedral, this boutique sells Champagne, wines, liqueurs, gourmet food items…basically everything you need in terms of food and drink from the region.

Did you know the locals in Champagne region aren’t just content with having the finest sparkling wine, they also try their hand at Whisky. You can even visit the Guillon distillery.

“You have to try this…” My local guide Denis won’t let me escape before trying one glass of, well, everything! Here he’s handing me a cup of Ratafia, a local sweet aperitif. Apparently those rose biscuits from Fossier are very good dipped into this. It will be, I swear, my last drink of the day, if not the year.

Technically they can’t call it caviar, but the little snail eggs certainly do resemble that gourmet snack. You can find these local delicacies at the Hédiard boutique in Reims (18 rue Colbert).

One of my favorite chocolate and pastry shops in Reims, the Chocolaterie des Sacres, famous for the chocolate-covered Maca’rose (macaron made with Fossier rose biscuits). My sugar high peaked dangerously as the owners Marie-Claire and Gérard Guillotin handed me one thing after another…the Pavés de Reims (small dark chocolates with Champagne-flavored ganche), their caramel macaron, their rose-flavored white chocolate bar, the bouchon chocolate…bliss! They are partnered with the famed Chocolatier Vincent Dallet in Epernay (where you can take culinary courses, call for info).

From the windows of the Chocolaterie des Sacres you can see the construction work for the new tram going through Reims. A huge mess, but it will be super nice when it’s done…in 2012.

Everywhere you go in Reims are reminders of the Champagne heritage. Here are some cork-shaped chocolates.

Our next stop was at the mint-green Chocolaterie Deléans. It is quite an old chocolate shop in Reims, originally opened in 1874, but now run by the young and dynamic chocolatier Vincent Frodefond.

Vincent does a lot of things differently than other chocolate makers…like chocolate dinosaurs instead of eggs and chickens and bunnies at Easter. There are also little white and dark chocolate balls with pop-rocks inside, like Champagne bubbles…

This is one of the few chocolate boutiques where tours are given behind the scenes. Here a young apprentice is spreading out the chocolate ganache, which will harden and then be chopped into squares…

This pastry shop and tea room on the Place Drouet has a lovely Art Deco interior. Denis tells me he’s been coming here since he was a child.

Since 1832, but with a snazzy contemporary boutique, La Petie Friande is one of the fine chocolate shops in Reims.

Chocolates made with Calvados, Cointreau, or Nectar of Grand Marnier. It’s not quite noon yet, but I’m not driving…

Chocolates in the form of bouchons (Champagne corks), filled with different liqueurs and Champagne. How many of these can one eat and still drive responsibly? Depends if you’re eating them on an empty stomach!

You’ll find Fossier’s famous rose cookies in stores all over France. You can take a tour of the factory on the outskirts of town.

Everything in the boutique is pink, of course. This very charming lady let me try one of everything. This is where I realized I’d be skipping dinner…and probably breakfast, too.

Les Crayères is one of the most illustrious hotel properties in Reims, with a haute-cuisine restaurant, Le Parc. For those who like gourmet French cuisine without the formal setting (and prices), there is now their new brasserie, Le Jardin. Ther outdoor terrace seating (closed now that it’s a bit chilly out) faces the manicured grounds of the Chateau de Pommery.

The interior has large picture windows that make it feel like you’re sitting outside. I had cooked foie gras on a bed of lentils and magret de canard with puréed potatoes served in a jar. Their wine list is particularly impressive, and you can sit at the bar seating for a more casual atmosphere.

Across the street from Pommery is the gorgeous Art Nouveau “Villa Demoiselle” owned by the Vranken Monopole Champagne Group (now joined with Pommery). They don’t actually use the caves here, they’re just for decoration. But it’s a lovely place to visit and taste (and buy) Champagne.

Everything but the floors were destroyed from the original house. Everything had to be restored. The stained glass was done by the descendants of the original glass-maker in Reims.

These matching seating/shelving units originally flanked the first fireplace. They had to be cut because of space and now flank the doorway. All of the furnishings were originally made for other properties, but they generally fit in very well.

Our friendly guide Guy offers a glass of the Demoiselle Champagne after the tour. Okay, maybe just one for the road.

We went on a Sunday, and it was absolutely dead.  It was incredible how dead the place was.  A freakin’ ghost town.  Impossible to get a taxi, so unfortunately we did a whole lot of walking!  And thank god we brought some sandwiches with us; it would have been tough to find any kind of decent food (apart from the fare you get at train stations).

Since it was just a day-trip, it wasn’t like we needed the city to be alive — we were just visiting a couple of cellars (that are open on Sundays) and the Cathedral.  And that pretty much filled up our time (along with all the walking in between!).  We went to Martel and Mumm.  The Martel tour was outstanding — the guy was terrific and since there were only a few of us, we got to spend about twice the usual time for a tour there.  Terrific tasting too.  I really feel like a learned a lot about champagne on this trip.  And Mumm was good too, though a bit more “corporate”.  And of course, I came home with some “souvenirs!”  Hey, they were selling some bubbly that is tough to find, even in Paris!

The cathedral was very impressive too, as I’m sure you know.