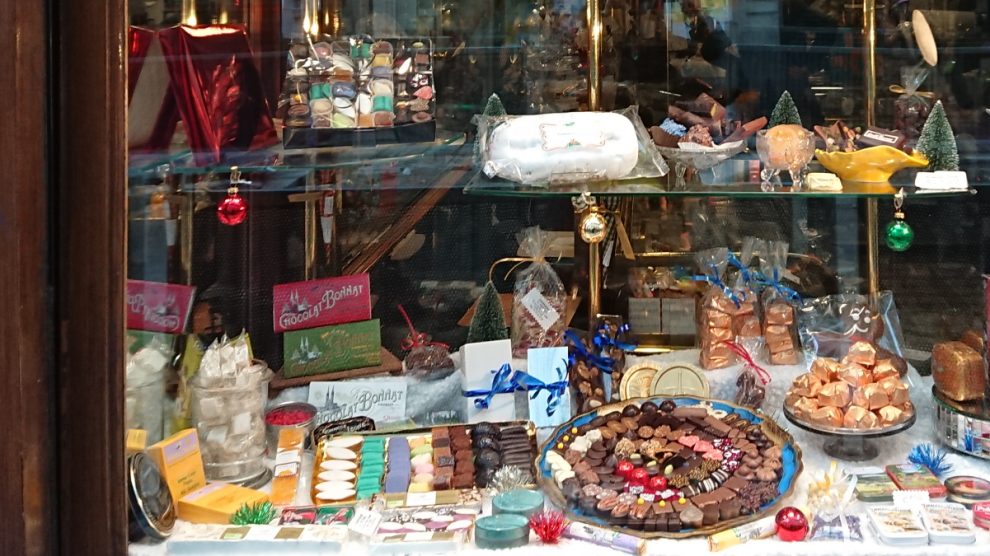 NOTE: Clocks in France turn back one hour on October 27th at 3am for Daylight Savings.

Through October 5
Don’t miss one of the most magical events of the summer, the Candlelit Evenings at the Château Vaux-le-Vicomte, just an hour south of Paris by RER and shuttle. Visit the family-owned palace and gardens that inspired Versailles by candlelight, including dinner in the gardens (or bring your own picnic or book a table for a gourmet meal starting at €49), a luminous walking tour and a fireworks finale. Every Saturday evening, entry €19.90.

October 5 Nuit Blanche
The annual Nuit Blanche  “White Night” festival starts at sunset on Saturday and goes all night, with a diverse set of artistic events, a parade of musicians circulating between Bastill and Concorde all evening, a free 10k run past the lit-up monuments, and shows dedicated to contemporary art. Check out the full program online or pick up a printed program in the square in front of the Hôtel de Ville from 5pm-2am. Free entry to al events. My favorite? The arts festival, kids activities and music concerts at Les Grands Voisins.

October 5
Feel like singing your heart out in front of a bunch of strangers with your very own live rock band singing back up? Don’t miss tonight’s legendary Ullmann Kararocké at the Bus Palladium (6 rue Pierre Fontaine, 9th arr) with pre-show by the Pink Floyd cover band “Echoes and More” at 8pm, karaoké starts at 11pm. Entry €10. Dress code: psychedellic!

October 6
Before closing up for the winter the bucolic GoodPlanet Foundation in the Domaine de Longchamp (Bois de Boulogne, 16th arr) is hosting a free meditation music concert today at 3:30pm: “Discover or rediscover meditation, and experience an original experience guided by Eloise Zeller with an original music by Armand Amar: that of meditating together for our planet, in the open air, on a music played live by the musicians. When thoughts and the heart vibrate in unison, a new world opens in you and beyond you, and allows access to a new state of being. And if this state of personal coherence could serve a greater coherence, that of our planet?”

Through October 6
Escape to a little island on the edge of Paris for the 99th edition of the Foire de Chatou antique market,with this year’s theme on the 80s. Formerly known as the Foire Nationale à la Brocante et aux Jambons (Ham and Flea Market), this popular twice-annual market has a mix of over 800 stands selling antiques and bric-a-brac, with an entire section dedicated to regional French foods, particularly pork in all its varieties. The Ile de Chatou, just north of Paris, also known as the Impressionists Island, is accessible via RER A from Charles-des-Gaulle-Etoile station in Paris, then either walk five minutes or take the free shuttle. Open 10am-7pm, entry €6.

October 9-13
Head up to Montmartre for the 86th annual Fête des Vendanges, the wine harvest festival (yes, there is an actual little vineyard in Montmartre, just behind the Musée Montmartre and across from the Lapin Agile Cabaret). This year’s theme is “The 18th Celebrates Colors” “The Fête des Vendanges de Montmartre 2019: a colorful adventure which will offer 150 events. Whether small or big, they will propose a rich diversity. People from the 18th district, parisians, Ile-de-France inhabitants, and tourists from all around the world will participate in this happy “rendez-vous”. There is grape stomping, food and wine tastings, fireworks, a parade, live music, and all kinds of fun throughout the “Butte“. Many events are free, some you have to reserve a spot, so get to the website or stop by the little Montmartre Tourism Office at 21 Place du Tertre (18th).

Through October 11
Entrance to the Musée du Quai Branly is free through October 11th in memory of the former President Jacques Chirac, who passed away on September 26th.

October 11-19
Celebrate Oktoberfest in Paris all week long in a huge Bavarian-themed tent at the Porte de la Villette (19th), tickets €35-€45, including €15 of drink tickets.  There will be music, Bavarian Cancan dancers, and plenty to eat and drink. Dust off the lederhosen and be ready for fun!

October 12-13
If you think the French would never go for vegan cheese and meats? Well if you’ve ever attended VeggieWorld Paris you’d know that’s far from true. Come join the enthusiastic crowd checking out 100% vegan foods including burgers, cheeses, saussages, pastries, and even sushi. There’s also cosmetics, home decor, clothing and shoes, and other products made without any animal products. At Centquatre, 19th, 10am-6pm. Entrance is €10 in advance online or €12 at the door, free for kids under 14.

October 16
Come for a free theatrical reading of “Amazing Grace is Yellow”, a play by Silver Wainhouse in three acts that shine light on the life of Beauford Delaney, an African American painter, born in 1901 in Knoxville, Tennessee. “The play follows Delaney from the time he left Knoxville in September 1923 to his death in Paris on March 26,1979. Tormented by voices, loved by all who made his acquaintance, and anointed by genius, Beauford’s beauty pulls us in and infuses us with love and grace.” At Reid Hall (Columbia Global Centers, 4 Rue de Chevreuse, 6th arr.), 7-10pm; register for your free eTicket.

October 16 – January 26
Calling all French Revolution history buffs and Marie-Antoinette fans: the Conciergerie is hosting a new exhibit this fall and winter, Marie-Antoinette: Metamorphosis of an Image: “Only a handful of historic figures have been the subject of such an abundance of representations: Marie-Antoinette is one of these, both during her lifetime and more notably after her death on 16 October 1793.  Even today, this queen-turned-icon is still a key emblem in popular culture. The exhibition will illustrate the many representations of Marie-Antoinette through almost 200 works, artefacts, heritage and contemporary archives, never-before-seen interviews, film extracts and fashion accessories, and shine a light on this worldwide phenomenon of media overkill through both a historic approach and a critical and comparative examination of forms.” Get your tickets in advance on the official website here.

October 18-20
One of the biggest flower shows of the season, Les Journées des Plantes de Courson is taking place at the Château de Chantilly, just 30 minutes north of Paris by RER/TER. Over 200 exhibitors in a stunning setting with pretty flowers and plants, what’s not to love? Buy your tickets in advance online to get the €16 entry fee (€18 at the door) or the €48 Family pass.

October 18-24
The Atelier des Lumières, known for their immersive digital art shows (currently on Van Gogh) is hosting a special nights-only event this week from 7-11pm, the Immersive Art Festival, featuring 11 competing artistic teams who each create a 4-minute-long immersive show on a theme of their choice. The jury composed of visitors who can vote at the Atelier des Lumières on a dedicated application and a professional jury. Tickets ONLY available online, not at the door (hurry before they sell out!): https://atelier-lumieres.tickeasy.com/en-GB/products

October 19
The first nationawide Nuit des Châteaux (Night of the Castles) takes place this evening in historic châteaux throughout France. Aside from the magic of being able to visit these castles all lit up at night, there are special tours, events, concerts and candlelit garden tours…check out the official website for the participating châteaux and their programs. The tickets vary depending on what is presented, but start as low as €1. You’ll need a car, none of the castles are in Paris or accessible on public transport.

October 23
Best-selling author Cara Black will be speaking tonight at the American Library at 7:30pm. She is best known for her murder-mystery novels featuring the female Paris-based private investigator, Aimée Leduc. Free entry.

October 25
Kararoké like you’ve never seen before, Nicolas Ullmann’s famous Kararocké (because it’s 100% rock) Unplugged tonight at Les Trois Baudets (64 blvd de Clichy, 18th arr), with all singers accompanied on stage by Nicolas on guitar and Yann Destal on piano. Every singer gets a personal engraved vinyl to take home! Karaoké followed by a DJ set. Entry €10 in advance or €15 at the door.

October 29 – November 3
Stuff yourself with all kinds of chocolately goodies at the annual Salon du Chocolat, at the Paris-Expo – Porte de Versailles (metro line 12), 10am-7pm. Entrance €14.20 (€39 for families, €34 for opening night). You can get advance tickets online or ask at your favorite chocolate shop if they have any extra invitations. Avoid the weekend unless you’re a masochist! Here are some Salon du Chocolat tips from a previous article by Secrets of Paris intern Tara Oakes.

October 31 Halloween
Although the French try to pretend that Halloween is “just for kids” in France, there are plenty of bars (especially any American, Irish or Australian ones) and other nightlife spaces holding costume parties. Ground Control in the 12th is hosting a “Glitter & Doom Burlesque Cabaret” for €11. La Bellevilloise in the 20th is holding both a Halloween Swing dance party from 7pm, and also a Fiesta de Los Muertos from 8pm until 6am in thr main hall, entry €15. The Monnaie de Paris (Museum of the Paris Mint) is hosting an escape game, “Enfermées au Musée!” for kids (€15) and adults €23).

Through November 3
New in 2019, the Château Vaux-le-Vicomte (the inspiration for Louis XIV’s Versailles) presents The Styx: River of the Underworld: “An exceptional adventure on the underground river which was diverted by Le Nôtre in 1654 during the creation of the French gardens, this specially designed trip is fun and interactive, and draws on La Fontaine’s text «The love of Cupid and Psyche ». Guided along on the Styx the river of the classical underworld equipped with headlamps and wading boots, you will go through a series of tests of agility and logic… An unprecedented and intense adventure performed by professional actors!” The cost is €60 per group (with 2-6 people per group) in addition to the château fee (kids have to be at least 1.3m tall). Note: this activity is only in French for the moment. Check out the other château events here.

▪       For Off the Beaten Track Tours (in French or English) #ExploreParis

▪       For French Theatre with English surtitles: Theatre in Paris

▪       For French Cinema with English surtitles: Lost in Frenchlation