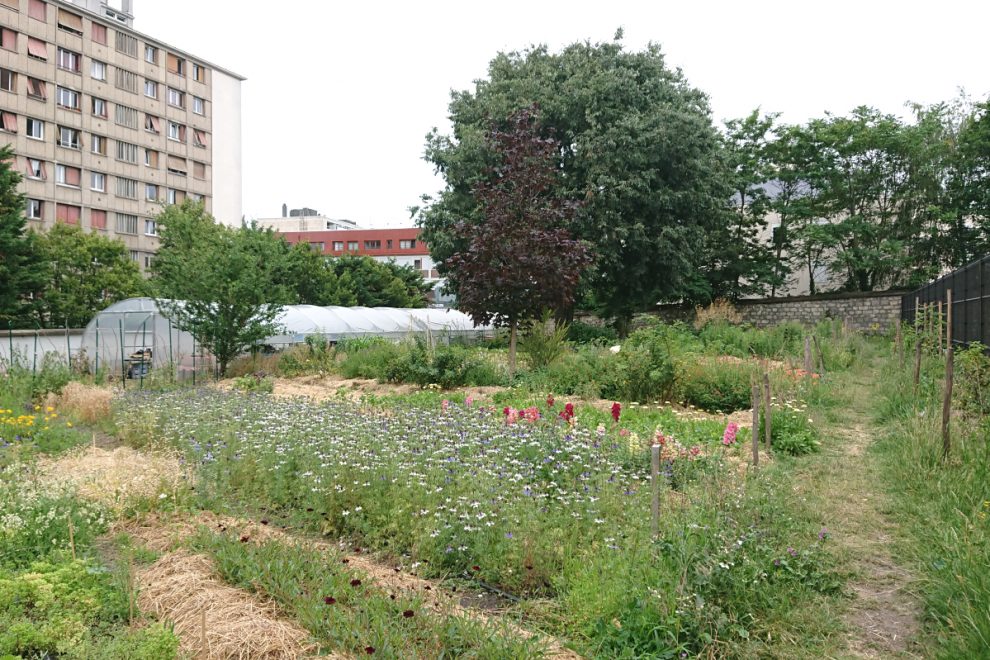 Last month after reading an article in the French press about an organic flower farm hidden behind Belleville cemetery, I signed up for a visit to check it out.

Welcome to the Farm

Once you’re inside the Belleville cemetery just outside Télégraph metro station the the 20th arrondissement, follow the cobblestones back and to the right where you’ll see the small green door in the stone wall that leads to the Plein Air flower farm. I joined a group of about a dozen other visitors for the tour, welcomed by the project’s 33-year-old founder Masami Charlotte Lavault.

After studying industrial design at the University of Applied Arts in Vienna and at Central Saint Martins in London, Masami Charlotte switched gears to focus on agriculture. After training in biodynamic gardening in Morocco and Great Britain, in the use of effective microorganisms (EM) in Okinawa in Japan, and in organic floriculture with the American horticulturist Erin Benzakein of Floret Flowers, she returned to France determined to create a flower farm without pesticides, without insecticides, and without chemical fertilizers.

It took her three years to find the land and convince the City to finally accept her proposal in 2017 as part of City Hall’s Parisculteurs initiative to green the city. “They didn’t seem to think I could do the physical work,” she says with a laugh. But she is no stranger to hard work. The 1200m plot was completely dominated by thistles when she arrived, and because no machinery could fit through the small doorway to get to the land, everything had to be uprooted by hand, something she did over the course of that first year, meter by meter. “I would clear a section and plant it, then move along to the next section and do the same thing. It took so long, when I finally reached the back wall I almost cried I was so happy.”

Today, Plein Air combines biodynamic farming practices with the use of efficient microorganisms to cultivate flowers in harmony with the natural environment. The flowers grown here aren’t just chosen for their looks, scent or “vase life”, but also because of their compatibility with the Ile-de-France climate. They’re started in greenhouses, but they’re raised to harvest right in the field.

Aside from the usual challenges of making a farm successful, there’s the additional work involved when your mission is to avoid toxic pesticides used in traditional flower cultivation. The day of my visit she’s relieved that the sky is overcast after a few scorching days of full sun. But rain showers in May were disastrous. “I lost 50% of my flowers to slugs in one night,” she tells our small group with a sigh. “As soon as it starts raining they move fast.” None of this seems to slow her down, though. In fact, much of Masami Charlotte’s workload comes from her own determination to do things her own way. “I could have just planted five or ten different kinds of flowers to make my life a lot easier, but I planted over 200 varieties, which all have different needs and flower at different times.”

“I get emails all of the time from people who want to meet up over coffee to talk to me about their dream of quitting their job and doing what I do,” she says shaking her head. But she doesn’t have time to “do coffee”. She works over 80 hours per week to make a living, translating in the evenings after long days at her Parisian plot, and driving for two hours each weekend to work on another farm in La Perche. She finally brought on a partner this spring to help with the workload. She doesn’t use volunteers because they take more time and energy to manage (assuming they’re even reliable), and she wants to prove she can make the project work on her own. At the moment, success would mean making her flower farm productive enough to pay herself a salary.

So what about the flowers? Of course they’re gorgeous, they’re flowers!  She sells most of them – when they’re ready to harvest – directly to the public through announcements on the Plein Air Facebook page and the online sales page. The flowers from the photos you see here were sold in the July 4th bouquets.

How You Can Participate

If you want to support the project or learn what it takes to do the same thing yourself, you can either sign up for one of the weekly guided visits (€13) or the monthly hands-on workshops (€90).  Sign up as soon as possible if you’re interested, because like her flowers, open spots go fast! The next tour is July 27th and the next workshop is August 1st. Note that Masami Charlotte also speaks fluent English; her posts on Instagram are often in French and English.

Pleine Air
https://pleinair.paris/
In the back of the Cimetière de Belleville
40 rue du Télégraphe, 20th
Open to the public ONLY with prior registration.

Why Traditional Cut Flowers Are Toxic

Who doesn’t love flowers? I like to treat myself to a bouquet from time to time, but it’s hard to ignore the mounting evidence that industrial flower cultivation, especially when imported from Africa and South America, has negative impacts on the environment. Learn more about the many reasons why the “Slow Flower” movement is growing:

A Tour of Ground Control at Gare de Lyon